You get a nice thick potato soup with this recipe that is rich and creamy. The Mennonite woman who sent me the recipe made the following serving suggestions:

Serve with buttered crumbs, or squares of fried bread, or pretzels on top. You might boil some sliced onion with the potatoes, if you like.

Wow, I bet this potato spooned over some fried bread would be amazing, or with the pretzels. yes, absolutely.

Do the Amish grow potatoes?

Potatoes are common in Amish gardens, but the soil has to be right, acidic and sandy to allow for the plants to spread out a bit underground. So if an Amish farmstead has poor soil for potatoes you won't find them as much. The Amish settlements in Maine are in a prime potato region and we've seen some bumper grows of Amish-grown red and russet potatoes!

The Amish, by the way, grow plenty of potatoes. Yes, Maine is a community with a growing Amish population, and the soil and climate perfect there for potatoes. So I have seen large Amish on potato farms in Maine. But I’ve also seen some very healthy potatoes being grown in Amish communities in places like Michigan and Ohio, you just have to have the right kind of soil
There’s just something fun about watching someone pour potatoes out of the ground. Many Amish will then store them in their cellar, and they’ll stay good for quite some time.

And, of course, there a gazillion ways to use potatoes, which is why they are beloved in Amish kitchens. Frying potatoes is a favorite, but potato soup has to be a close second. I've been to many Amish kitchens where a bowl of warm potato soup is on the menu for practically every meal during the winter months. Nothing better than breaking off a hunk of homemade bread and sopping up some soup.

Brown the flour and butter to get a "paste" like this, it'll add richness and thickness once you add it to your soup.

Garnish with pepper, parsley, and salt. You can sprinkle some shredded cheese and bacon bits on top also. I was just trying to keep this as authentic as possible, so I didn't add any of those, but feel free to if you wish!

By the way, the 2 ¾ cup of milk ingredient was a little odd, I thought. Why not 3? So I used 3 cups and I think that is fine, but if you want to stick with the actual recipe, use 2 ¾, it'll be slightly thicker soup. 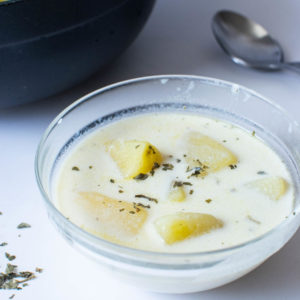