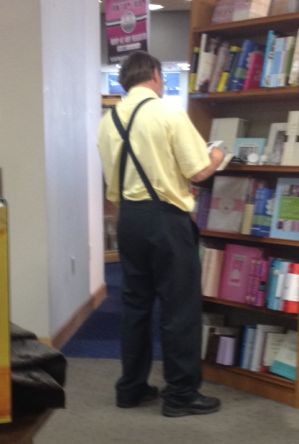 Photo caption:  This photo fell into a "gray area."  This Amish man is browsing books at a public bookstore in Cincinnati and I snapped a photo from behind.    I thought there was cultural value in the photo.  You clearly can't tell who it is.  Personally, I think it's okay, although part of me felt a little stalkerish.

The above verse from Exodus is the Biblical basis that most Amish use for rejecting photography. Over 20 years ago when I first start studying and spending time with the Amish there was one main rule outsiders had to embrace: whatever you do, do NOT photograph them. I even heard stories about some Amish who had angrily grabbed the cameras of outsiders and run over them with their buggy. Sheesh, that made me think twice about taking out my point-and-shoot camera that I got free with my Time Magazine subscription. You know, the kind of camera that actually took old film that used to be sold in rolls? Remember Time Magazine? 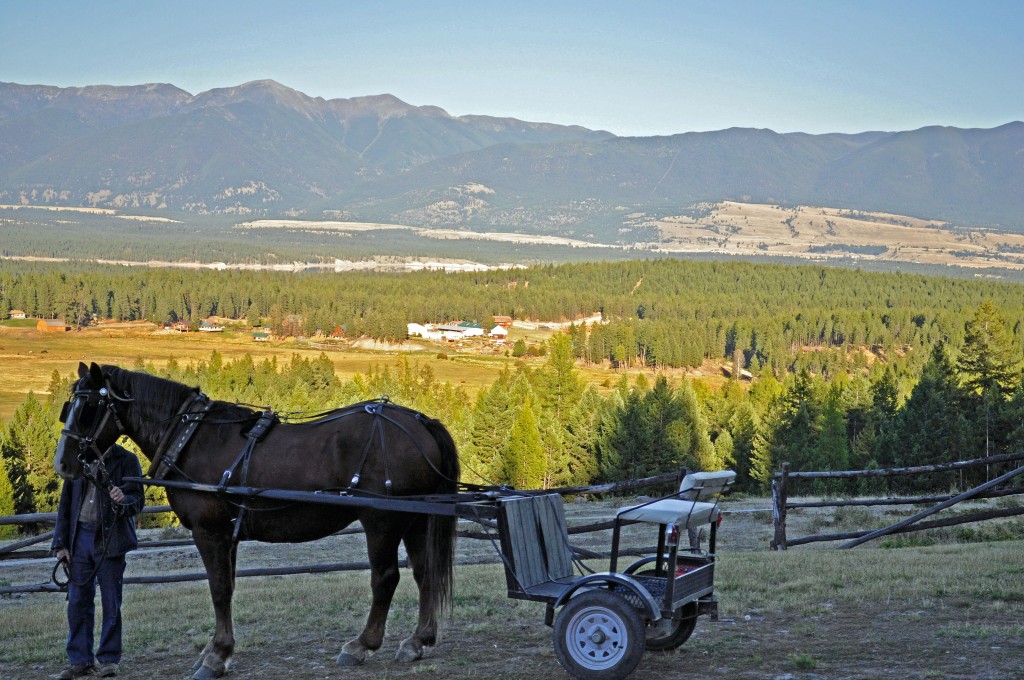 CAPTION: This Amish man in Rexford, Montana consented to being photographed as long as his face wasn't showing.

I’m not sure if any cameras were ever actually run over by buggies, it could have been a “rural legend.” But clearly most Amish were very opposed to photography. Today, it’s more complicated. Not all Amish interpret Exodus as constituting a prohibition on photographs. To be sure many Old Order Amish and Mennonites still very much object to being photographed. Others, however, say “well, if you catch us in a documentary type photograph….it’s okay, just as long as we aren’t posing.”  If they are out baling hay, for instance, or putting up a barn.  Still others don't object to photos at all, even posing. The posing is viewed,by some,  as vain or frivolous and perhaps a more blatant violation of Exodus. And still other Amish have no qualms about being photographed, they just don’t want to be photographed for fear of being ostracized by others who don’t feel the same way. So where does this leave the visitor to Amish country?

My advice remains: don’t photograph them and that is based more on common courtesy than theology. Would you want someone photographing you out hanging wash? Or your children playing? The answer is probably – if you are like me – no. Now, I do think it is perfectly permissible to ask if it’s okay to get a photo.  So follow the “golden rule” and use your own judgment and I think you’ll be fine. Personally, I think photographing a buggy from behind is fine.  There is a lot of personal judgment that goes into this, a lot of split-second calculus.  Would I object to someone taking my photo, say, at a restaurant from an angle where I couldn't be identified?  Sure. I wouldn't care. If it was a photo of me stuffing my face with food and you could see me, yeah, I probably wouldn't like it.

One other note on this topic, the Amish are often more lenient about having their children in photos.  They aren't official church members yet.  That said, if someone pulled up to the curb and started photographing Aster in our yard, I'd probably call the cops.  So I am extra careful about photographing children.  I generally just don't unless I have permission.  But, man, I have missed out on some cute, cute photos.