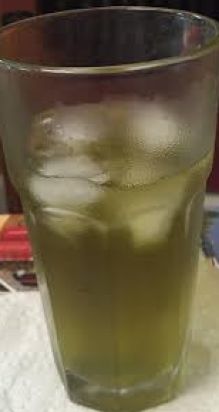 I had the chance to try this refreshing drink recently in an Amish home.  An Amish man served the drink to me on a warm summer's day and, wow, it was so refreshing. Very minty. I was told that it didn't have apple in it at all, instead it had "apple mint" leaves which is something different altogether.  You can read more about apple-mint here.

Apparently apple-mint makes a good warm tea, but it was a totally refreshing cold tea.  Here is a recipe for cold apple mint tea.  Scroll below the recipe for the Coke stuff!

Print
Prep time
30 mins
Total time
30 mins
Serves: 5 servings
Ingredients
Instructions
Wordpress Recipe Plugin by EasyRecipe
3.3.3077
Drinking a refreshing homemade tea IS a great alternative.  And my mother-in-law makes a superb, simple sun tea that is delish.  It is unsweetened, but when I try to make the same tea at home it just doesn't taste as good and I don't know why.  If I could get my hands on some of my MIL's sun tea daily I'd probably be fine subbing that with Coke, it is that good.

SIGH, those of you on my email list know that I'm a bit of a Coke addict.  I wish I weren't and I do need to rein in the habit.   I really tried to kick the habit earlier in the year but just ended up drinking more beer and sometimes chocolate milk as a substitute.  Neither of them were exactly great replacements.  On the flip, I am also drinking more water now than I used to.  And that is good.  But I just can't seem to kick my need for a Coke fix.    But, recently, a British pharmacist created an infographic showing just what happens to your body after cracking open a can.  Ugh, I need read and re-read this, perhaps this will prod me in the right direction!  Click here to view the infographic and article.