You've got to try this recipe. Every time Daniel takes a bite, healmost goes into dreamland.

My uncle, Paul, sells these homemade cookies in his store. No, we  don't spend the money actually to purchase these individually wrapped

treats. Every now and then when they have some leftovers from the weekend, they'll pass some on to us. On some occasions, Cousin Owen,

who has been boarding with us, will purchase one for Daniel. You can  imagine with Daniel being a daddy with a big heart and five little

children who also relish these cookies, he hardly ever gets the chance to eat one all by himself.

As I have told you before, I just don't have the free time to spend in  the kitchen as I used to. If I bake, I try to simplify by making bars

instead of individual cookies. Yesterday, however, when Daniel was

gone from early morning, till late at night on a business trip to  Chicago, I decided this is the day to make some for him. With

permission granted from the bakery, I made a copy of their recipe and  set to work. With most of the children taking naps I started mixing up

the butter and sugars.

helpers. Jesse seems to be the one with the 'longest fingers' these

days. After enjoying some snuggles and cuddles with him, I put him in

the high chair with a snack. It lasted only for a spell. “I'll have to

watch him closely,” I told myself taking him out, then carefully

sliding cookies onto the center of the table, supposedly out of

Jesse's reach. I was merrily going my way when I discovered Jesse's

warm from the oven. “Jesse, that's a no-no," I explained, as I got him

off the chair he had climbed onto. Feverishly I worked as swiftly as I

could, desperate to get Daddy's cookies frosted, wrapped, and into

containers before more damage is done. Seemingly the squabbles were

ever increasing. Finally, I proposed, “Why don’t we all do or say

something extra kind for everyone.” My heart warmed, and things calmed

down a bit as 'I love yous" were said and hugs exchanged. 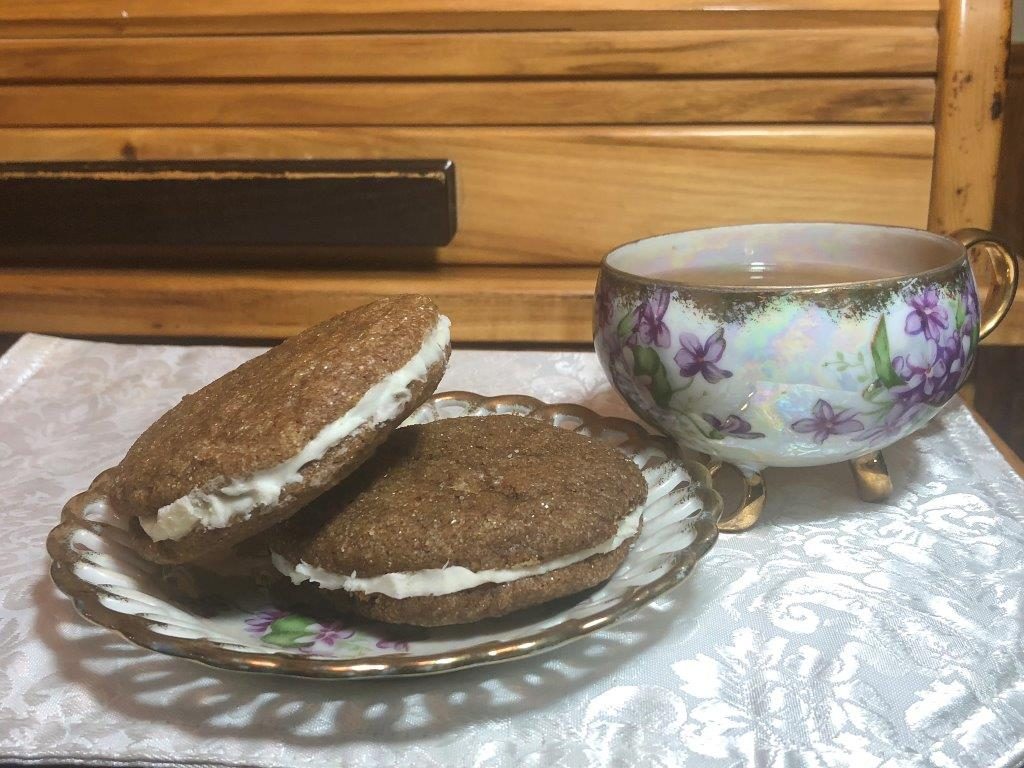 Jesse, however, had not forgotten the taste of fresh cookies and

all that his one-year-old hands could get into. “I'll try the sassy

seat,” I told myself.   That's a child seat that clips onto the table

so they can watch, but supposedly not participate with the kitchen

action. Only moments later, it was evident that I really had not made

a smart move. I caught him with a long-handled spatula, trying to rake

the cookies over to his perch, or at least get Mom's full attention.

"This is ridiculous," I told myself, dropping the cookies and ushering

everyone into the living room where we had story time for a good while.

After resuming to my cookies, things seemed to go a bit smoother.

Julia and Austin worked on welcome home cards for Daddy, to be placed

next to the cookies for when he came home.

After a simple supper, Julia and Austin eagerly helped put everything

away in the kitchen in preparation of lighting candles, setting out

the flowers he gave me last week, and decorating the kitchen table for

Daddy’s return, including a large plate of cookies, but only after

Jesse was sound asleep in bed!

After the house was quiet, I dropped my own note on the table and

informed him that I want him to wake me up on his return.

It was worth it all when he woke me on his return. I was thrilled to

see him, why I told him that my excitement to have him back is a lot

like it did when he lived in Ohio before we were married, and I had to

wait a couple weeks to see him; only this time we were married!

We enjoyed tea and cookies together, briefly catching up on the news

before retiring for the night.

He loved the cookies. This time I hadn't cut back too much on sugar

and didn't use any exceptionally healthy flour, I just wanted to treat

him to some really sweet cookies he deserved. We have this joke that

because of how well he likes them, and it makes him so happy!

Join us in mixing up a batch of your own. Be sure to pass a couple on

to your mailman, neighbors, or whoever.

By the way, I’m not sure whether I was foolish enough or brave enough

to try for another batch of cookies. Yesterday when Julia told me that

the heart to say no. Well,  we were all quite relieved when the last

cookies were all safely stowed away- actually no, they didn’t all make

it safely, some got shredded by long fingers we all love dearly.