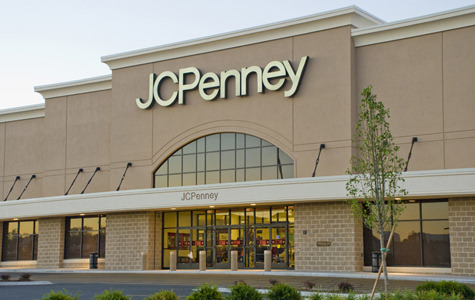 It's Thursday, so time to do some throwback.  Today's topic:  JCPenney.    And it is is JCPenney.  Not JC Penney.  Not J.C. Penney.  Nor JC Penney's.  It's an easy name to butcher.  But we've talked a lot on this site about stores of yesteryear and my fondness of Kmart, which is in the process of imploding.   But what about JCPenney?  My grandmother always just referred to them as "Penney's."  And she'd always refer to them with in a slightly exasperated tone.  Like, "oh Penney's has that item" or "Penney's didn't have it."

For me, JCPenney is like the favorite aunt that you never get around to visiting. It's comforting to know it's there, but I hardly go there.   But they do have a great variety of stuff if you're just in a Christmas list pinch.  There are three JCPenney stores within a 20 minute drive of where I live.  I think the last time I went in one was with Rachel a couple of years ago to get her Mom a Christmas gift.  There's never been a JCPenney that I know of in my hometown, but there was - for a long time - a JCPenney "catalog center" in town where I guess you could go an order from the catalog, call to place an order, etc.  I guess there are still some of these places around but, geez, it seems like you could just go online and do all that stuff.

So JCPenney announced last month there will be 140 stores shuttering soon.  They have not announced the list yet. I'll post it when it is available, but Morningstar credit has posted the 40 stores most likely to make the list (which means 100 more will still be closing beyond this list, geez).  So many of them are in small towns that probably can't support a JCPenney but also hate to lose it. I cringed when I saw Defiance, Ohio on the list. Defiance is a tiny town in NW Ohio that has its own mall still, but losing JCPenney would probably be a death blow to it.

Are any of these JCPenney stores near you? Click here to see the list.  Do you shop at "Penney's?"