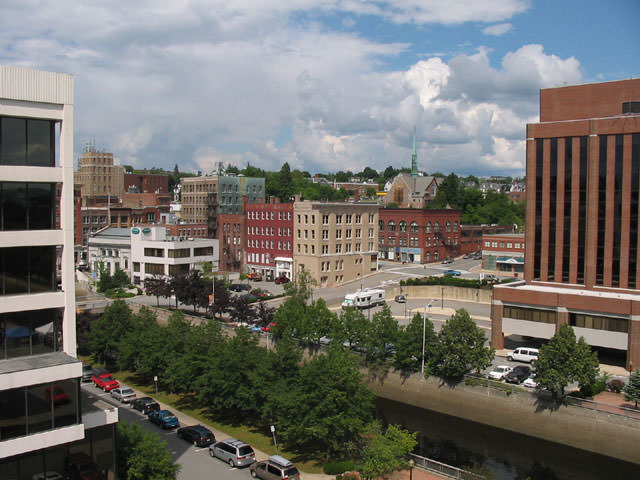 Downtown Bangor, Maine...one of my favorite places in the whole world....and this town just seems so much larger than it is....

Over the years I have traveled – a lot.  I suppose that is one of the side benefits of waiting to start a family until I was a little bit older, we did get to see a lot.  My travels began in earnest at age 18 when I hit the road to sell the brand new Amish Cook column, which I had created, to editors.  I’d get in my car and just show up at a newspaper office and try to pitch the editor on this concept of an Amish Cook column.  Most of the time it didn’t work.  You know how you feel when a sales shows up.  No sale.  But my persistence paid off and the column grew.  This was the early 90s and newspapers were still glamorous and a vital source of news and information.  While I personally still love newspaper, few people could make a tangible case that they are as relevant as they once were.    During my journeys I discovered that some small towns/cities seem a lot bigger than they are because they are far from anyplace.  For instance, my hometown in southwest Ohio is sandwiched between Cincinnati and Dayton, so we don’t have a lot here.   But other towns our size have all sorts of restaurants, shops, parks, amenities and even commercial airports because they are so far from everywhere. So here is my list of the "biggest small towns" I've encounter, perhaps you are familiar with one or more of them?

LIMA,OHIO (population 38, 355):  This city isn’t much bigger than the one I live in.  There’s just one difference: you have to drive 80 miles in either direction of Lima to get to a city of any size.  Because of its relative isolation Lima has all the amenities you’d expect to find in much larger cities:  it’s own network TV affiliate, two hospitals, a thriving mall and commercial district.  And if you want to visit Amish country, by the way, take your pick…the Berne, Indiana community and Hardin County, Ohio are not far away.

QUINCY, ILLINOIS (population 40, 915):  The Quincy Herald-Whig became the first newspaper in the country to carry The Amish Cook column back in 1991 and they still carry it today!  Quincy has all sorts of amenities that we could only dream of in my similar-sized hometown: Menard’s (a giant home improvement chain store), a commercial airport, and a thriving downtown nestled on the banks of the Mississippi River.  And the Quincy Herald-Whig newspaper has a vibrant readership to this day circulating in a three-state area.

MINOT, NORTH DAKOTA (46,321):  The North Dakota Humanities Council once sponsored me to come to their state  to give a series of talks at libraries.  The topic: of course, the Amish!  Although we did discuss Hutterites a bit too.  SIGH, that was probably my best shot to visit a Hutterite community and I bobbled it.  My schedule was just so packed that it didn’t happen.  I stopped in Grand Forks, Fargo, Bismarck, Devils Lake, and Minot and Minot truly is an “Oasis on the Prairie”…and when I was there it was just before the oil boom began in earnest, so now it probably seems like an even larger place.

BANGOR, MAINE (32,673):  Hard to believe this city only has a population of 30,000.  The city has its own international airport, a daily newspaper that covers an area about the size of Connecticut, malls, hotels, and anything else you might imagine.

There are a lot of places that could occupy this fifth spot on my list: Harrisonburg, Virginia;  Parkersburg, West Virginia; Paducah, Kentucky;   Kokomo, Indiana Dodge City, Kansas;  and Hays, Kansas  but….I think my pick is:

ELKINS, WEST VIRGINIA (population 7214):  For a town this small, it just spreads out and spreads out and if you drive there from the east, the town just is this beacon of services and shops after a long, long winding, hair-pin drive over the mountains. And if you are coming from the west, Elkins is sort of the last chance to refuel you car or your belly.  Really neat town that I hope I have time to explore again someday.  I’ve been through there a couple of times.