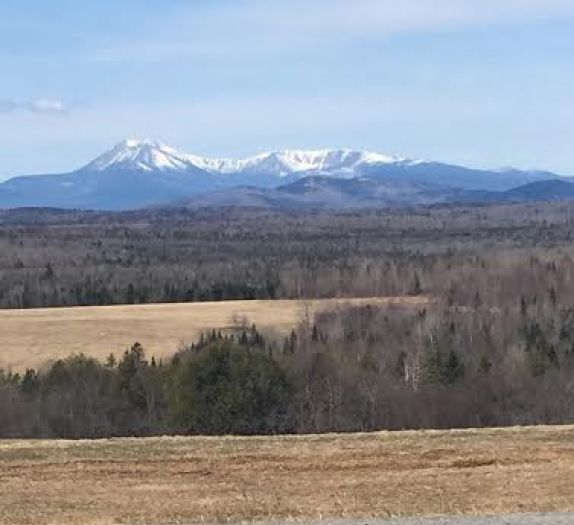 A view of snow-capped Mt. Katahdin from an Amish farm outside of Patten, Maine, one of many new communities that have cropped up in that state in recent years...

This is all just guesswork.  But the Amish are a rapidly growing church.  Not surprising when families have 6, 7, or 8 children.  Throw on top of that a retention rate that is north of 90 percent and you have a lot of Amish people needing places to live. In some older more established communities like Grabill, Indiana and Berne, Indiana  there are practically homes piled up on top of homes.  Homes became sprawling dwellings with additions and build-ons.  So on one hand, understandably, Amish people like to stay close to kin and that often means staying in the older, larger, established communities.  On the other, the Amish need to establish new communities to handling their growing population.  Two notable places where the Amish first put down roots in 2016 were Vermont and Prince Edward Island, Canada.  What places this year might see horse-drawn buggies on their roads for the first time?

NEW HAMPSHIRE:  The Amish expanding throughout New England with large and growing populations in New York and Maine.  Vermont welcome its first Amish settlement last year.  New Hampshire with it's "Live Free or Die" comportment and plenty of land just seems like a logical fit.

WESTERN MASSACHUSETTS:   There is a growing Amish presence just across the border north of Glens Falls, New York, and the Berkshires of of Massachusetts have plenty of land and rural hospitality, so look for buggies here in 2017.

FLORIDA:   It'd not surprise me if the Florida Panhandle attracted an Amish settlement in the coming years...

WASHINGTON STATE:  The Amish have attempted in fits and starts to settle in Washington State and it just seems like with the Amish footprint growing so much in Montana and northern Idaho that it'd be only a matter of time before the is a strong, established Amish settlement in Washington.