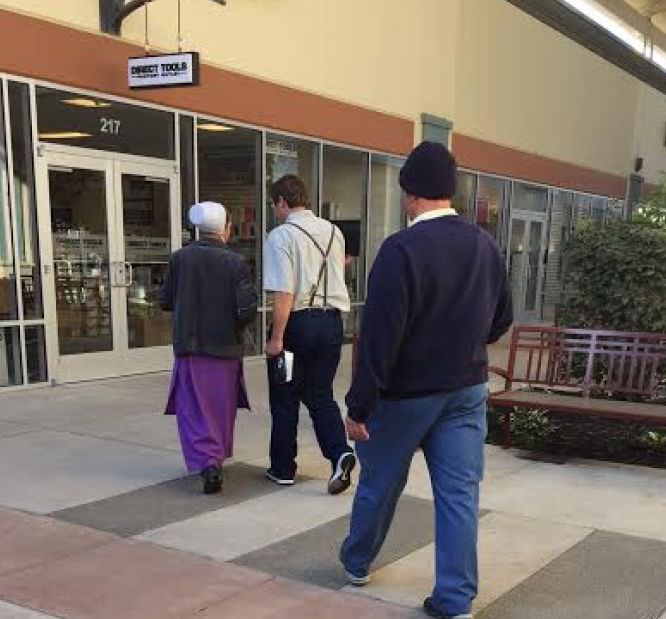 There is a mall just off the interstate in southwest Ohio called Cincinnati Premium Outlets.  It is a sprawling open-air mall (SIGH, these open-air concepts have really caught on in recent years, I love them in summer, but winter?? No thanks) choc full of name-brand stores like Nike, Old Navy, and the like.

Anyway, it’s not necessarily a spot you’d expect to see crawling with Plain people. Yet that is exactly what I saw on Saturday afternoon.  A group of Amish fanned out across the mall in search of deals and, from appearances, it seemed like scored some.  By the way, I just never seem to find deals at those places, they seem as pricey as any other mall, although my wife has a way of sniffing out bargains (she can find a $3 shirt in an instant, it'd take me a month of searching).  I just like going to this mall because (like the Target store I wrote about the other day) I have a comfortable routine here with Aster.  There’s an outdoor playground which she loves, a few 25-cent rides, and the Disney Store (which she calls the “Mickey the Mouse Store”).

The Amish shoppers were toting a lot of packages. One older Amish man was carrying a bag of socks from the Gold Toe store.  A group of young Amish people slipped out of Rue 21 (a clothier for, as the name implies, the younger set). Others checked out the Direct Tools Factory Outlet and the Lindt Chocolate store.  Another young 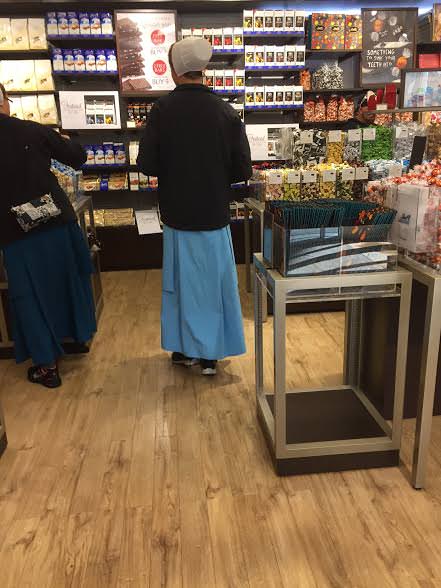 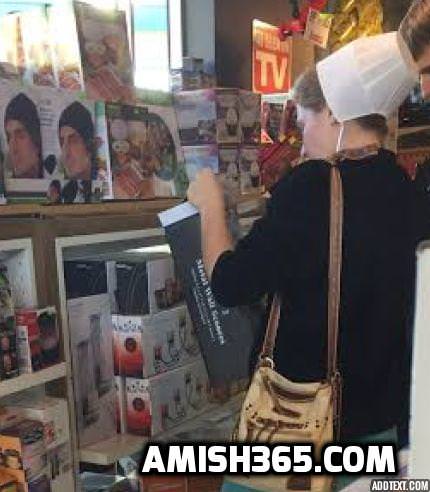 An Amish couple peruse the "As Seen on TV" store...

Amish man swaggered out of the Wilson’s Leather store carrying what looked like a jacket.  I did get a chuckle out of the Amish couple in the “As Seen on TV” store.  Hey, wait a minute, how did you see it on TV, you don't have TV?

So, how common is it for the Amish go shopping at a mall?  Not as uncommon as you might think.  Obviously, the more conservative a community,the less likely they'd be to go.  But - and this is just an educated guess - these look like Amish people who might hail from northern Indiana and that is a very progressive, commercially integrated Amish community.  You kind of get the best of both worlds there, a lifestyle grounded in faith and family and simplicity,yet you enjoy a connectedness with the outside that many Amish elsewhere don't quite enjoy.  One of the young Amish men was wearing a bright pink wristband which makes me think this was a tour group of some sort and there was a tour bus idling outside the mall for awhile.

Just a note about photography.  SIGH. Tough call. Always is. I do think there’s some educational value here in illustrating how the Amish are interconnected to the same commercial, capitalist culture that most everyone else is.   Secondly, how much of an expectation of privacy can there really be at such a busy place?  That is a standard I’ve heard other Plain people convey to me.  It’s one thing to be photographed in a mall away from your community, completely another when you’re in your backyard hanging laundry.  Third, I didn’t capture faces and these appeared to be Amish people from a more progressive community (such as northern Indiana) and, coupled with changing views among the Amish about photography, sort of fell into my quick calculations as to whether I should take some photos.