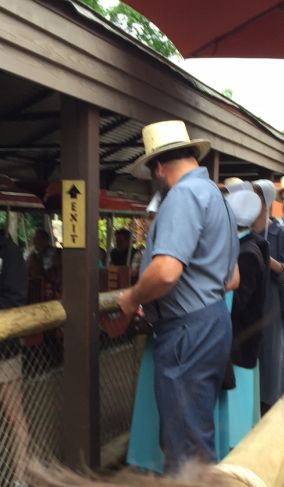 Amish at the Zoo: Rachel and I received zoo passes from our father-in-law as a Christmas gift last year so we try to use the passes whenever we can. Cincinnati has one of the better zoos in the country.  One of Aster's favorite things to do when we visit there is to ride the train which chugs through the various exhibits.

It's not uncommon to see Amish and other Plain people at the zoo, Cincinnati or elsewhere.  Animals are viewed as creatures in God's kingdom and a natural, low-tech way to have an enjoyable family day together.  The zoo in Fort Wayne is quite popular with the Amish as is Columbus.  Cincinnati isn't one of the more obvious destinations for Amish visitors as there aren't that many communities close by  (of course there are some).  Of course these Amish could be from anywhere, they could just have been on there way somewhere and decided to put the Cincinnati zoo on their itinerary.  Had I managed to be in line closer to them I absolutely would have introduced myself and found out where they were from but our paths never crossed.