Among the Old Order Amish, stews are almost as common as casseroles. An Amish homemaker who is busy with canning, cleaning, mending, helping with homework, paying bills, gardening, greeting visitors, and on and on, doesn’t have a lot of free time to head into the kitchen and create a bunch of inventive recipes. Most Amish cooks want tried and true old-favorites on hand, recipes that are reliable "go-to" recipes. These recipes have often been road-tested many times, handed down from grandmother to mother to daughter and so on.

So for a busy Amish homemaker who has a house full of children and a husband off at work, beef stew solves a lot of problems. Any meal that you can just keep simmering on the stove for a long time that doesn’t require a lot of maintenance or labor is a win.

Sometimes a beef stew, especially during summer months, will simmer outside in an open kettle.

Beef stew is almost like chicken casserole among the Amish in the sense that there are so many variations among recipes that I could post beef stew recipes every day for the next year and never post the exact same one. Often the differences are subtle, but enough to create subtle flavor differences.

Do the Amish cook food in wood-fired ovens?

Cooking styles range greatly across the Amish. On the more "liberal" side with the "electric Amish", you'll find electric stoves and slow-cookers. On the other end of the spectrum, the most conservative Amish still cook most everything over wood. Kerosene ovens are still in use in many Amish settlements. Wood-burning ovens are also used to cook food in many kitchens,.

For instance, today’s contains Allspice which adds a slightly sweet comforting cinnamony flavor, and this also has sugar in the recipe, which doesn’t attempt to be subtle. It’s not a lot of sugar, but between the allspice and the sugar, this beef stew has a slightly sweeter flavor to balance out savory of the beef.

Beef stews are pretty popular year-round in Amish kitchens, if they’re being made in the summer, many Amish have a “summer kitchen “or “porch stove “so they can cook without the heat broiling the house on a warm July day. As we get into the autumn months, stews are made inside, and fill the house with a wonderful aroma

This Amish Best Beef Stew has some very basic ingredients. It does call for egg noodles, most Amish will make their own. These were some thin egg noodles from Aldi that did the job just fine, but whatever type of egg noodle you wish to use is good.

The chunked stew meat is key, make sure it is fresh and lean. And you can add spices to this like red pepper flakes or cayenne pepper if you wish. Amish cooking tends to be more on the bland side, but it doesn't have to be for you, if you want to add some spice!

Brown the beef. Many Amish, by the way, use stainless steel skills. Cast iron are also popular., Non-stick, not so much. 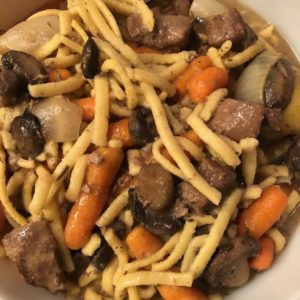 Tried this recipe?Let us know how it was!
« Amish Farmhouse Potatoes
Baked Amish Swiss Cheese Chicken »