We knew it was coming, but then, is it possible to get ready to say good-bye? The children and I were all gathered around Grandpa's casket.

There were those memories of being a little girl, and going out in Grandpa’s woodworking shop while he measured, cut, and nailed while Grandma sanded. I would spend happy hours stenciling as I sat on the worktable until it was time for Grandma and me to go to the house. Without fail, Grandma would play a game of memory with me. I had no idea how she was helping to build my character those young years as she believed in me and constantly reminded me how amazed she was with my accomplishments or how she liked my dress.

Now here we were, 25 years later, with arms around each other. It was not a memory game we had in common; it was the loss of our beloved partners. It was the sadness, and it was the joy of knowing they are safe with Jesus.

Daniel’s parents, my parents, and Josh's surrounded us in support and helped hold the four youngest children who clung to us ‘for dear life’. It brought back fresh memories of four months ago when it was Daddy dear.

Soon we made our way through the line as we shook hands with aunts and uncles. Daniel’s dad took the children out to play while I found a seat with the family. We talked in undertones as a stream of people filed through for visitation.

By 4:15 my cousins and their partners lined up to sing. Though part of me really wanted to help sing, I knew I wouldn’t get far.

As their voices softly blended, I struggled to grasp the depth of the reality of the words. It was my very favorite song, Stairway to Heaven. It was so painfully precious, my tears knew no limits. I had already used many tissues before, listening to this song, and my dear cousins sang it.

Next came Daniel’s all-time favorite, The Best is Yet to Come. Daniel’s siblings came through the line just as they started singing it. Memories, fresher and more distinct than mere words can tell, came flooding back anew. Surely heaven is just up ahead, and soon we will all be safely there!! Though it was all so raw, in my heart, I knew that feeling so torn apart will bring another deeper level of wholeness within, as God is given the burden.

Soon it was supper time. I sat next to my dearest cousin, Amy, whose husband went home to heaven two months ago. We rehashed memories, we wiped tears, we laughed.

After supper we had several more calling hours before heading back to Danville to Daniel’s family, where we planned to spend the night.

The following morning Josh and his family went with me back to the funeral to Grandma’s house where the visitation had been. This time there were around 450 people present. A special thank you to Daniel’s sister Mary for watching the children to give me extra space to grieve and process another funeral. It was a difficult, but healing day for me.

When I came home, the children had glowing reports of their day, including Uncle Tobias, who had taken them kayaking and fishing.

The last leg of the day was now to travel home. I couldn’t help but miss Daniel’s capable way of loading the van with children, car seats, snacks, luggage, and the likes. The trip home passed swiftly and smoother than usual as we talked, sang, and the children even took naps. I admit that coming home minus Daniel is no simple thing, but God has always winged us through it all. And no doubt, he’ll continue doing the same, not only for us, but for you all, wherever your biggest trial may be.

The Amish chicken spaghetti casserole served at the viewing had a soothing slant, perfect for the occasion. If you decide to try it, here you go with the recipe!

Amish Chicken Spaghetti Casserole is another one of those super delicious, super hearty casseroles that turn up at Amish gatherings and, wow, this is the epitome of comfort food. I mean, it presses all the right buttons: chicken, spaghetti, cheese, and, yeah, just super. You can adjust the amounts to fit the proportion of people you're feeding; this is just super. My parents made it, but I sampled it....they gave me two helpings to take home and I ate them both in one sitting. Good stuff!

My only "complaint" with this Amish Chicken Spaghetti Casserole recipe is that I would've maybe added a bit more chicken. You'd think two pounds is enough. I don't know, maybe for most people it would be. Or I would have cut the chicken into slightly bigger chunks. For my taste, the spaghetti kind of overwhelmed the chicken.

This is the stovetop portion of the preparation, the chicken, cheese, spaghetti, mushroom soup and all of that being combined and cooked.

This is is the Amish Chicken Spaghetti Casserole going into the oven. Just a basic glass baking dish should do the trick, but you can use one of those deeper 2-quart casserole dishes too.

I liked it baked until it gets golden brown on top. My parents made this and it's about right, I mean, if I were doing it, I'd probably have left it in the oven another 10 minutes to give it a dark, golden brown crunch on top, but that is just me, I like my food cooked to death.

I sprinkled some paprika and thyme on it for color and flavor and served with some juicy in-season watermelon and it was a near-perfect meal! 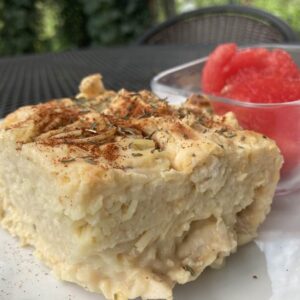