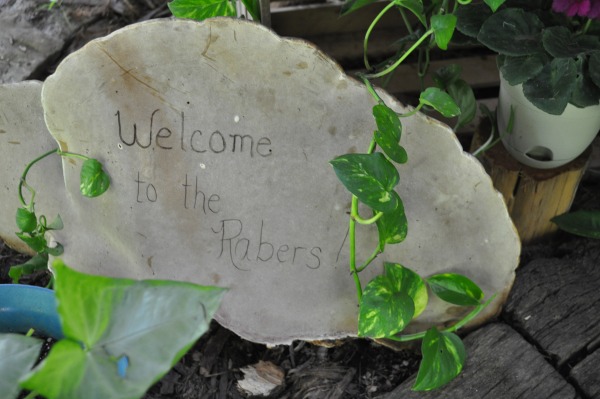 On Sunday evening Daniel, Julia, and I, along with some other relatives, visited my grandparents.  We laughed and cheered as we watched the children try out their “train."  With their imagination at its best, they constructed a train.  It consisted of two 3-wheeled bicycles as the engineers, with a nephew sitting in one of the carriers, followed by a little wagon with Julia and two other cousins.  Next came a bike cart carrying a child, then after that were three small 2-wheeled carts, each escorting someone.  Each train car was tied to the one in front of it, making a unique yet hilarious caravan.  The first attempts to get started were a bit jerky and definitely a challenge for the "engineers" who did their very best in pulling the heavy load.  After several attempts it went more smoothly.

Recently we had the opportunity of attending a family reunion on my dad’s side.  Quite some time had passed since I last saw my 49 Raber cousins.  With a lot of us cousins being young and newly married the number of little children and babies is skyrocketing.  It’s hard to keep track of them all!

The meals were well organized.  Two aunts or uncles, along with their married children, were in charge of planning, preparing, and serving one meal.  That way each of us got a turn.

We arrived on Friday evening in time for supper.  Two uncles, who are cooks at heart, grilled delicious hamburgers over a fire while the rest of us visited and tried to wait patiently for them to complete their task.  It took some time with there being a total of 107 people.  Besides the hamburger sandwiches, potato casseroles, pie, and soft serve ice cream were also on the menu.  Everything tasted top notch.

After darkness fell some of us gathered around the fire once more.  A crackling fire at night is so cozy and inviting.  We chatted awhile and then joined the others who were enjoying a scrumptious snack, including huge, moist homemade donuts.

On Saturday morning at 7:30 the large, old fashioned dinner bell was rung, indicating to all that breakfast would soon be ready.  "Breakfast stacks" had been prepared. The stacks (a layered, all-in-one meal) started off with biscuits as the foundation, then eggs, potatoes, and ended with onions, cucumbers, sausage gravy, and a cheese sauce.  Mmmm, that was yummy!

The day was spent visiting and playing games such as volleyball, corn hole, etc.  Several of us ladies filled a bunch of water balloons which were used for "water balloon volleyball." The players paired up by twos, each holding two corners of a large bath towel.  Placing a water balloon in the towel, they would give it a quick fling and send it flying across the net where an opposing team member tried to catch it with one of their towels and send it back again.  It definitely added a different twist to a regular volleyball game.  Thankfully it was a beautiful day, so most of the time was spent outdoors.

I helped Julia and her little cousins blow bubbles.  They made quite the mess, but enjoyed it all the same.  Don’t children have more fun if they can make a mess with whatever they’re doing?

My family was among the ones responsible for lunch.  We made a “mush” taco (that's how we say it in Dutch) or mashed potato taco.  It was a first for me to be making it, or even having tasted it.  It also consisted of different foods, put on a stack.  Each person fixed his or her own stack as he pleased.  Mashed potatoes were topped with fried venison with taco seasoning.  Next was lettuce, onions, cucumbers, cheese sauce and taco chips.

Most of us stayed until Sunday afternoon.  We had our own services on Sunday morning which was something different for us, yet also interesting.  We sang awhile then Uncle Vernon, who is a bishop, shared about God’s plan for mankind, and how He sent Jesus, a perfect example.  We are now called to walk in his steps: to love as he loved “others”, and to serve as he served those around him.  Living for the Lord truly is a blessed life!

This week I’ll share a recipe of one of the most scrumptious foods we had at the reunion.  My cousin’s wife from Pennsylvania had made these Heavenly Oatmeal Bars.  I told her I’ll have to get a copy of her recipe, to share it with you, so here it is!

Mix together.  Spread on baked crust.

Sprinkle on top of peanut butter mixture.  Spread reserved crumbs on top.  Bake an additional 20 minutes or until golden brown