THE AMISH COOK
BY GLORIA YODER
We were on our knees, having our morning prayer together when I heard the "Tingle, tingle" of a bell. "What could it be?" I wondered. As we rose from our knees, Daniel stepped outside with Jesse to investigate. "There's a cow in the garden!" he reported.  Jesse loves mooing like a cow, but as they stood right next to the cow and it opened it's huge mouth and let out a giant "Moo!" It wasn't what Jesse was expecting; his big blue eyes got bigger still as he watched in amazement. Austin was all eyes and ears as well. "Mom! There's a cow in the garden!" he exclaimed as he returned to the house. Indeed it was a cow, and by all appearances, it was ready to be milked. "Ah, Daniel, imagine some fresh cows' milk," I said wistfully. At about that time my cousin Joshua's son came across the woods. He had followed the tingling of the cowbell. This old-fashioned bell was fastened to the cow with a leather collar. 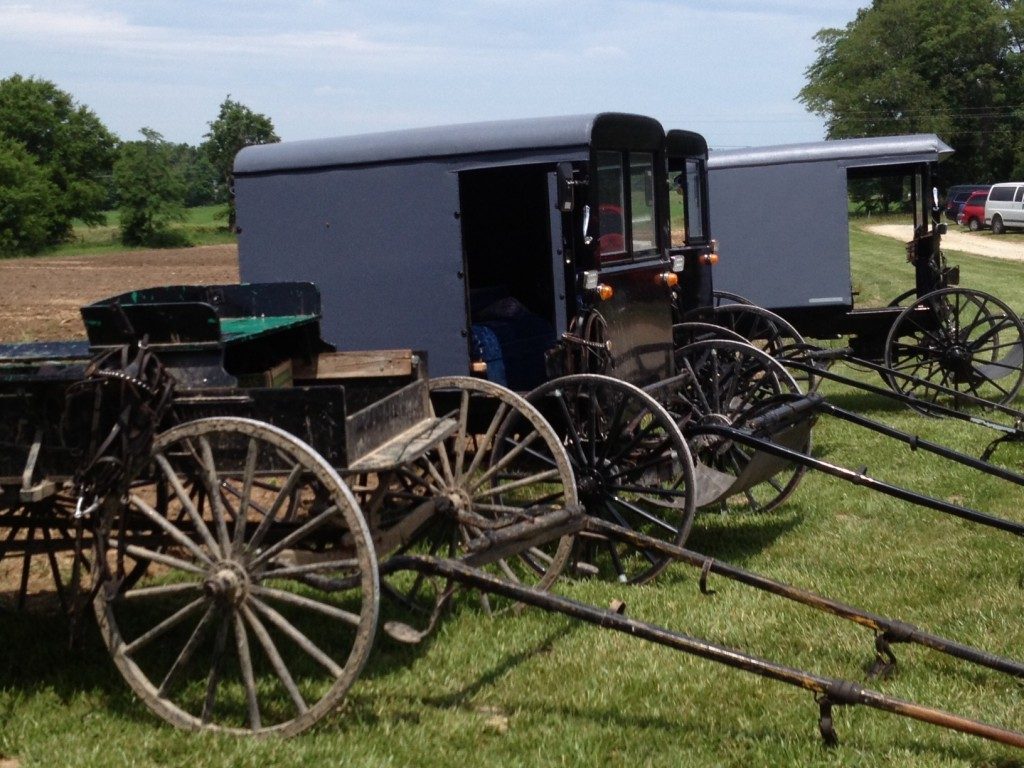 In Daniel fashion, he asked Michiah if they would mind if we'd feed and milk the cow. Of course, we knew Joshua wouldn't mind a bit, and Michiah assured us that they do have plenty of milk. I was absolutely impressed and as excited as the children! I ran for the pantry to fetch a milk pail, which turned out to be a canner since I didn't have a milk pail. In a jiffy, I had the babies, and Rayni all piled into our twin stroller and had Julia and Austin trailing along as we hastened to the barn.
Daniel milked one side of the cow as I took the other. Memories of girlhood days of cows and goats we used to milk, flooded over me. At that moment I knew we had to get a family cow sometime and hopefully before too long! (We had decided to wait until the children are a bit older.)
Before we were done milking, Rayni wanted to be held. As I scooped her up and took her over, right in front of the cow, she looked at it ever so sweetly, as she tilted her head and crooned, "Hi piggy!" We burst out laughing, yet being careful so as not to hurt her feelings. Once more I explained to her that this is a cow. Several weeks ago we purchased a few pigs that we are raising to butcher this winter. With the children on all sides to help, I strained the milk and put a few ice packs in a small portion of it to cool it down in time for us to use with our homemade granola. Austin was a bit skeptic, "I don't want to use that milk!" he declared. I almost couldn't believe my ears. I've always liked fresh cows' milk and somehow just expected my children to be the same way. But then, "He's used to store milk," I told myself. It was Daddy's turn to speak up, "We're using this milk with our granola," he said calmly. "If you don't want granola with this milk, you may just skip your granola for this morning and have a banana instead."  We all knew that it was of utmost importance to him to have his cereal for breakfast.
"I want cow's milk!" he quickly responded. As he scooped up his granola, he emphatically informed us that it is really good! Mama smiled.
Daniel whisked up a batch of iced coffee, using the fresh milk. Mmmm, there's something about eating and drinking things that you really know where they come from!
As a young girl, I made lots of yogurt with fresh cows' milk. This recipe works for store bought or fresh milk.