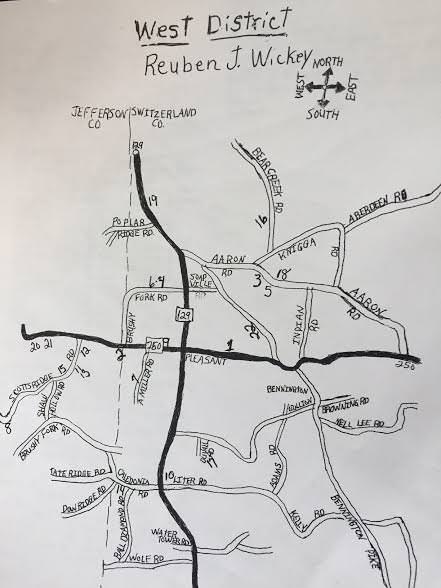 Amish directories often contain hand-drawn maps like this one in the Switzerland County, Indiana community. Amish church districts are often named by geography...this, for instance, is "West District" and Reuben Wickey is the bishop.

The Amish are a very insular culture and because of that you have certain names that are common in some settlements, but not others.  Yoder and Miller seem to be pretty universal.  You're going to find Yoders, Millers,and Bontragers basically anywhere.  But after that it gets more muddled.   For instance, Schwartz is an Amish last name that is generally found just in the Swiss Amish settlements of Indiana.   King is a very, very common Amish last name in Lancaster County, but not so much elsewhere.

Some Amish communities publish "Amish directories" which are compilation of names and addresses of people in the church district.  It's like a phonebook without the phone numbers.  And the size of the directory, of course, varies by the community.  There is a single directory for Berne, Indiana that is a larger, thicker book than an Amish directory that covers the entire state of Michigan.  Gives you an idea of how large the Berne settlement is.

I have one such directory for the Switzerland County, Indiana Amish community which is a slender volume of about 30 pages and the names provide an interesting window into this church.  For instance, there are plenty of Millers and Masts and Bylers (all common names) interspersed with some less common ones.  Summy and Lee are both Amish last names in this community, just a handful of families have those names.  I've not seen Amish with those last names anywhere else, so perhaps they are converts.  This community has an interesting mix with Eichers and Schwartzes showing their influence of the Berne, Indiana community where those names are common.  But this area also has Dienners, Kings, and Glicks, which are far more common in Lancaster County, PA. So someone must have moved at some point sometime.'

Troyer and Stoltzfus are also common Amish last names and there are several of those in this directory as well.