Of all the recipes that have run in The Amish Cook over the years perhaps none have intrigued me more than Gloria's homemade guilt-free fudge, aka "bean fudge" which she ran in her column last month.

Gloria called it a "guilt-free fudge" because it was a way to "sneak" some more fiber into her family's diet and she minimized the role of sweeteners.   Gloria used stevia as a sweetener but I didn't have any and, well, I realized I didn't have any unsweetened peanut butter on hand (which is also what her recipe called for), but we did have some regular peanut butter. So Aster and I set about making a more conventional version of the bean fudge using regular peanut butter and some sugar. Believe me, I was skeptical. Amish Guilt-Free Bean fudge?  You have to be kidding.

We soaked the beans overnight and this morning got to work.  And, well, the recipe works.  Aster loved licking some of the mix that was leftover in the bowl.  Here I am watching my daughter eat, well, beans by the spoonful.  Amazing.  I wasn't hiding that fact from her either. She and I soaked the beans and she wanted me to pulverize them using our stand mixer. You just want to liquify those beans as much as possible and to do that you need a high speed mixer to cream the heck out of them after they've been soaking all night.

(Update: When I originally wrote this post, Aster was 4, now, at 7, she is wiser and in some ways less willing to experiment, not sure I could persuade her to eat bean fudge today)

So, no, the version I made was not guilt-free, it was sweetened with sugar and molasses.  I used some coconut also.  But while it is not guilt-free, it is also full of beans...so, there you go. Gloria's version, if you follow it, will be much more guilt-free. This would seem like a great option for someone with a sweet tooth....I also will say that I have eaten two little squares and I feel full, fuller than I think I should, so that may be another side benefit of these fiber-filled fudge squares.

No Batch Ever The Same

Gloria did say that no batch ever turns out the same, so I think you could really experiment with it.  She also said that you could roll mix into balls instead of making a pan of fudge out of it and in retrospect I might have done it that way.  Now, here's the big question:  did I detect any "bean-y" flavor?  I think if someone gave me a piece of this fudge I'd eat it and say "wow, this is good."  But knowing what I know part me thinks I can detect something unusual about the flavor, maybe the slightest hint of a hint of beans....but that could all be in my head, I could be full of beans.....So give this Amish guilt-free fudge a try! (Update: One of our readers tried this using canned, unseasoned refried beans and she said it turned out well that way and it saved a lot of work with soaking and mashing beans!)

Health trends do seep into the Amish communities eventually. Sugar-free, gluten-free, and lactose-free have started showing up in Amish bulk food stores more and more along side olive oils and canola oils that have started to gain favor among Amish cooks in recent years. 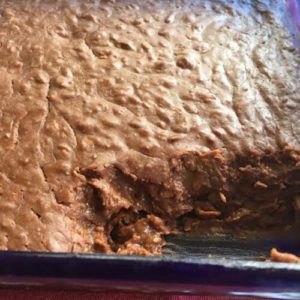 If you want a sweet treat without some of the calories and sugar, here you go!
4 from 1 vote
Print Recipe Pin Recipe