Marjorie Yoder survived the attack her husband Amos did not.

It's been two years since Amos Yoder, 79, was murdered in his Kentucky home on a Sunday morning.  And his wife Marjorie was viciously attacked.  Two years later the crime remains unsolved.

I do have sources who know some things about the community and people involved.  I'm not a fan of anonymous sources, but sometimes I am more interested in what a person has to say than who says.  Marjorie did survive the attack but am being told she can provide very little information.

This is a recap of what happened as posted on Amish365 two years ago:

Some media reports have indicated the couple was “choked”, but Kentucky State Police public information office Stu Renke says that is not the case, it was “blunt force trauma.” 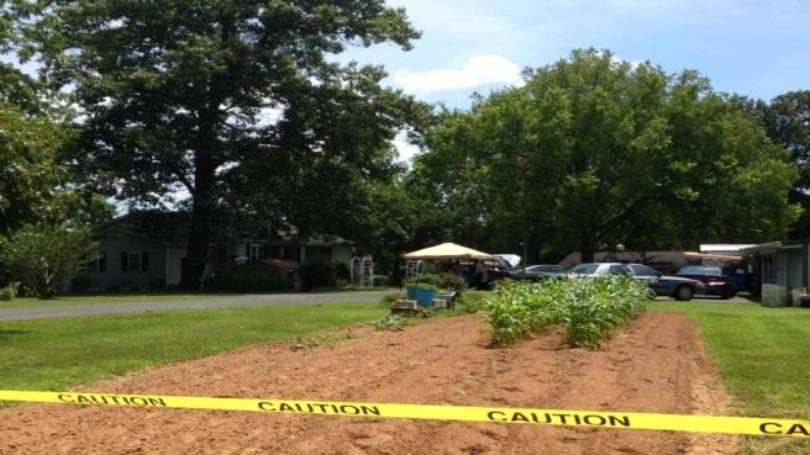 State Police process the crime scene outside the Yoder home.

I’ve seen differing reports about whether the couple was/is Amish or Mennonite, the source says that they “refer to themselves as Mennonites and do use horse and buggy on Sundays and for weddings and funerals.”    The source said that everyone in their area knows one another:

“Where we live is mostly farmland.  They are real nice people,easy to get along with,” the source said.

It doesn’t really matter whether they are Amish or Mennonites, it’s a tragedy.  A friend of mine says Amos Yoder is Amish and she is a credible source.  Why the discrepancy in reports?  Guthrie, Kentucky, where is murder took place, is home to the New Order Electric Amish, a small group of progressive Amish.  From Todd County’s website:

Todd County is home to the oldest Amish settlement in Kentucky. Founded in 1958, the “Guthrie community” is home to “electric” New Order Amish that originate from a now-defunct Amish church at Stuarts Draft, Virginia. Though they dress plain, use the horse-and-buggy, and speak Pennsylvania Dutch, New Order Amish differ somewhat from Old Order Amish in that they tend to have a greater focus on missions and outreach and are generally liberal on technology – such as the use of electricity in homes, and tractors and other modern machinery on their farmsteads. While New Order Amish dot the rural landscape in southern Todd County, a growing settlement of Old Order Mennonites exist in the northwestern portion of the county near Fairview.

I’m thinking that the Yoders are part of this group.

SOMEONE WHO KNEW THE YODERS?

The source also said that everyone would have known the Yoders were away on Sunday morning except that, the source said, “they probably didn’t go that Sunday” because Marjorie had just had knee replacement surgery.  That meshes with my own gut feeling….that a Sunday morning in such a rural location seems like an odd, odd time and place for a murder unless it was someone who knew the routines of those involved.  This is pure speculation on my part, but….that’s my gut feeling.

The source said that Marjorie Yoder had to undergo reconstructive surgery on her face from the injuries.

And that is all I have.  Trooper Stu Recke says: “If anyone has any information no matter how trivial, and callers may remain anonymous, call 270-676-3313 with tips.”

This story is on my mind now because I was contacted by someone recently who knew the Yoders and the community and also speculates it could have been an inside job.  This is pure speculation on my part, but if this was a "garden variety break-in" it seems like the person would have been caught by now. But if it was someone in the community there is a tendency to cover and close ranks in some Amish communities even for rather horrific actions.
One of my sources also makes the point - and this is a very broad generalization   - that "Amish or Mennonite men, even 60 and over are in good health and strong  it would took some one very strong or number of men to overcome them."   I think that is a pretty broad statement, I know some frail older Amish men, but he is right that many are in very good shape and to die from blunt force trauma is startling.
Someone out there knows something, post here if you do, email me, or call the KSP at 270-676-3313.
« Sorghum, Sorghum Molasses, and Molasses and Bunches of Recipes: Sorghum Pan-Fried Chicken, Sorghum Molasses Crinkle Cookies and More!
8 Amish Recipes That Sow Your Oats! »