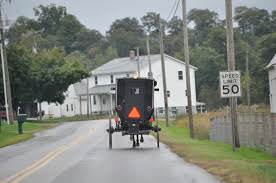 Amish pen pals are tough, but not impossible, to find.

I have been editor of The Amish Cook column for over 25 years and one question I get asked a lot is:  how do I go about getting an Amish pen pal?

Now, interestingly, I get asked this question a LOT less these days than I did back in the 1990s.  As email and texting has become more ubiquitous, even among the Amish, writing letters by hand as declined.   Still, for some more conservative and older Amish writing letters remains a fun hobby.  The problem is that the Amish see a lot more of us than we see of them.  So the curiosity is often a one-way street.  Amish people see non-Amish people everyday whizzing by in their cars or delivering their mail or depositing their checks at the bank.  Most Amish aren't all that curious about us, they see us all the time.  Many non-Amish, however, don't run into Amish people on a daily, or even yearly, basis so the curiosity is greater.  Also, many non-Amish people have this need to connect with a simpler life which feeds the hunger for an Amish pen pal.  Again, it's a one-way street.  There just aren't many Amish people out there saying "gee, I want a faster, more hectic, chaotic life, I'd love to connect with someone who has one."

That doesn't mean there aren't opportunities to find Amish penpals. There are.  A few years ago I met with a non-Amish person who really wanted a pen pal and I said "Not gonna happen, you just aren't going to find an Amish penpal."  And within weeks she had proven me wrong, she had gone to Holmes County, Ohio after our conversation, struck up a friendship with a bishop's wife, and gone from there.  They still write to this day.

There's no "registry" of Amish people seeking non-Amish penpals.  You have to do the spadework yourself. Go to an Amish community and make some friends.  You could probably also put an ad in The Budget, an Amish newspaper, but I wouldn't hold your breath for a response.  I'm not trying to rain on the penpal parade, just trying to be realistic from experience.  Again, your best bet is to visit an Amish community, make some friends in person, and then send a letter.  Also, if it were me, I'd consider a Mennonite penpal, you get the same connection with simplicity without all the competition for attention. Just a thought.  Good luck!