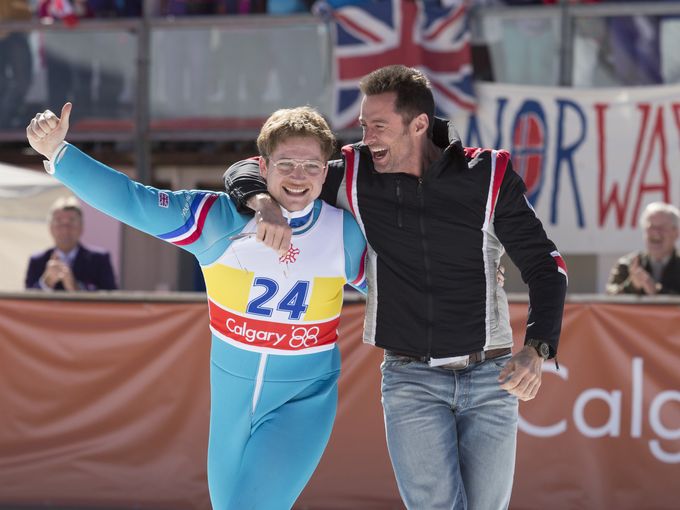 Taron Egerton and Hugh Jackman star in "Eddie the Eagle"

I have vague memories of watching the 1988 Winter Olympics in Calgary and hearing about Eddie the Eagle.  I would have only been 16 at the time, probably more concerned with whether a girl would ask me to the Sadie Hawkins Dance (whew, she did) than following the Winter Games.  Still, I remember my Dad talking about Eddie the Eagle and then, after those fleeting moments in the headlines, he retired to the depths of my memory destined to be forgotten forever.  That is, until a movie intervened.

The premise of the movie is of a young boy with no real athletic gifts aspiring to be an Olympian.  When he discovers a loophole in British Olympic bylaws, he realizes he can compete in the games by become a ski jumper.  Since Britain didn’t have an official ski jumping team he didn’t have to qualify against anyone or anything and eventually found himself in Calgary competing the slopes with the world’s best.

Hugh Jackman plays a fun, if not predictable, role as the crusty down-on-his-luck former Olympian who comes out of retirement to mentor Eddie.

This is a feel-good movie that that plays to our better angels and drives home the age-old message that a person can truly do anything they set their mind to do.  This movie was especially uplifting against the loud, shrill backdrop of the discourse in America today.

Eddie is played by 27-year-old Taron Egerton.  My one complaint with the movie is that he came across as a bit cartoonish in his role.  On the other hand, at the end of the movie, when you see reels of the actual Eddie, Egerton does seem to get him pretty spot-on.  So, if you are looking for an uplifting, you-can-do-anything message, I recommend the movie!

As an aside, if you want to get parents of a toddler a great gift, consider a gift card to the Cinebistro.  It is a chain, so there are locations in various places.  Sheesh, I was skeptical at first, thinking eating dinner and watching a movie wouldn't go together. I just thought it'd be too disruptive, trying to put ketchup on my fries as I'm watching the flick while waiters flutter to and fro. But, no, after going there I would hardly want to see a movie elsewhere...You eat supper at your seat, these spacious, recliners with spots for the tray to rest.   It's a great way to get in a dinner and movie date without leaving Aster at the grandparents for too terribly long!