Au gratin is a French type of cooking which usually involves a browned crust on top of some sort.   The French roots of the dish have sometimes been stomped out in America's pop culture food pantheon.   Still, au gratin potatoes offer an excellent option if you are searching for a middle ground between mashed potatoes and a heavy, overloaded baked potato.

My wife was searching for an au gratin potato recipe to take to a family gathering recently.  I offered up an Amish recipe but she passed over it favor of one from the Pioneer woman (what, pass over the chance to use Velveeta cheese?)

This recipe was adapted from the Pioneer Woman, you can see the original recipe here.  Rachel's adaptation is below. I will say that this was a really good choice for an au gratin dish.  The flavors were pitch perfect, not too heavy, not too light...there was a hint of crispness and I, personally, like the way the potatoes are cut in this dish.  Some au gratin dishes just used sliced potatoes so you're sort of stuck spooning out cheese slices of potatoes with droop off the spoon and are hard to eat, this dish the potatoes come ready-made to put into your mouth. 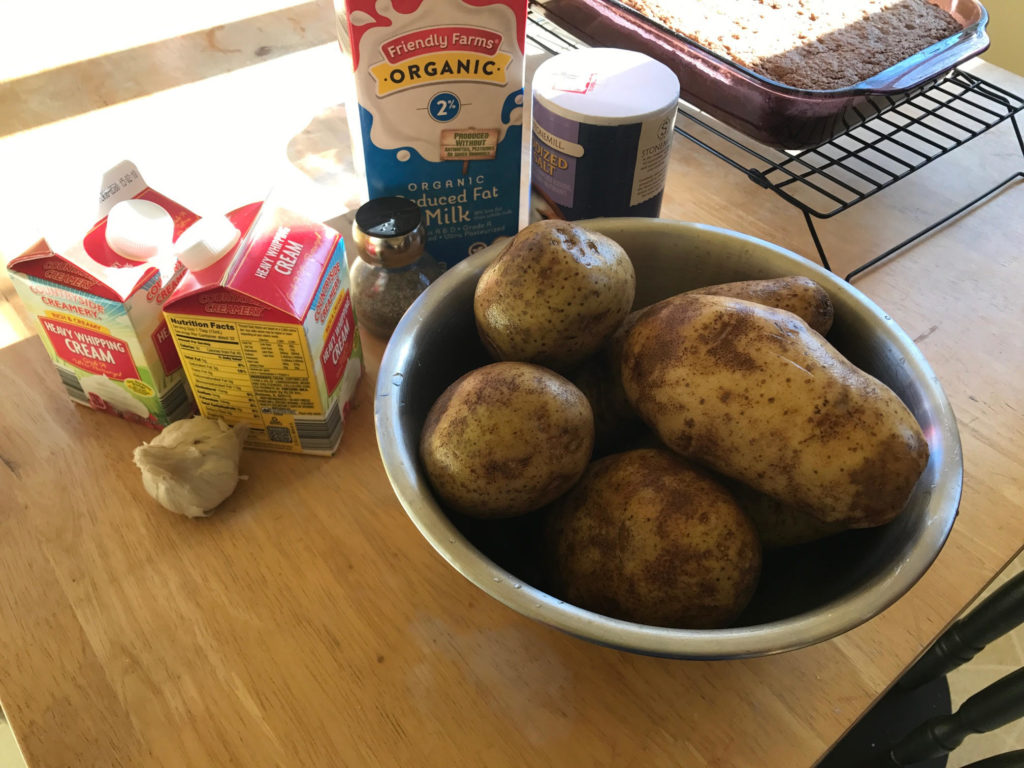 Can't go wrong with some au gratins at Christmas dinner or your holiday party! 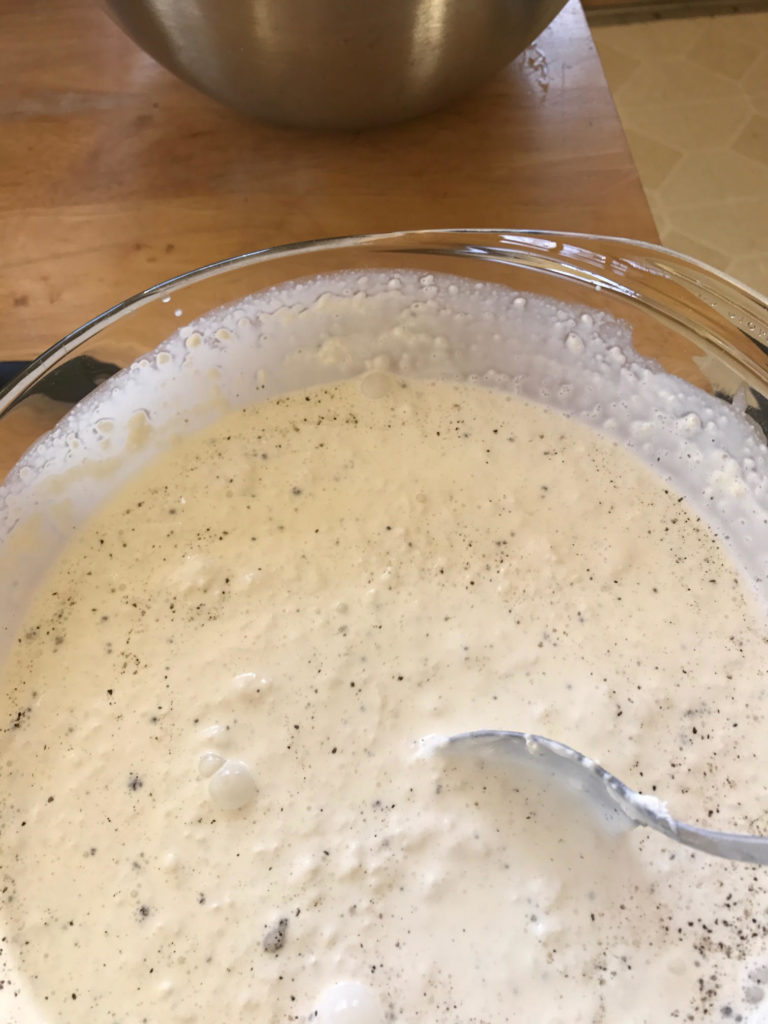 Ahhh, the cream sauce for the potatoes....mmmmmm 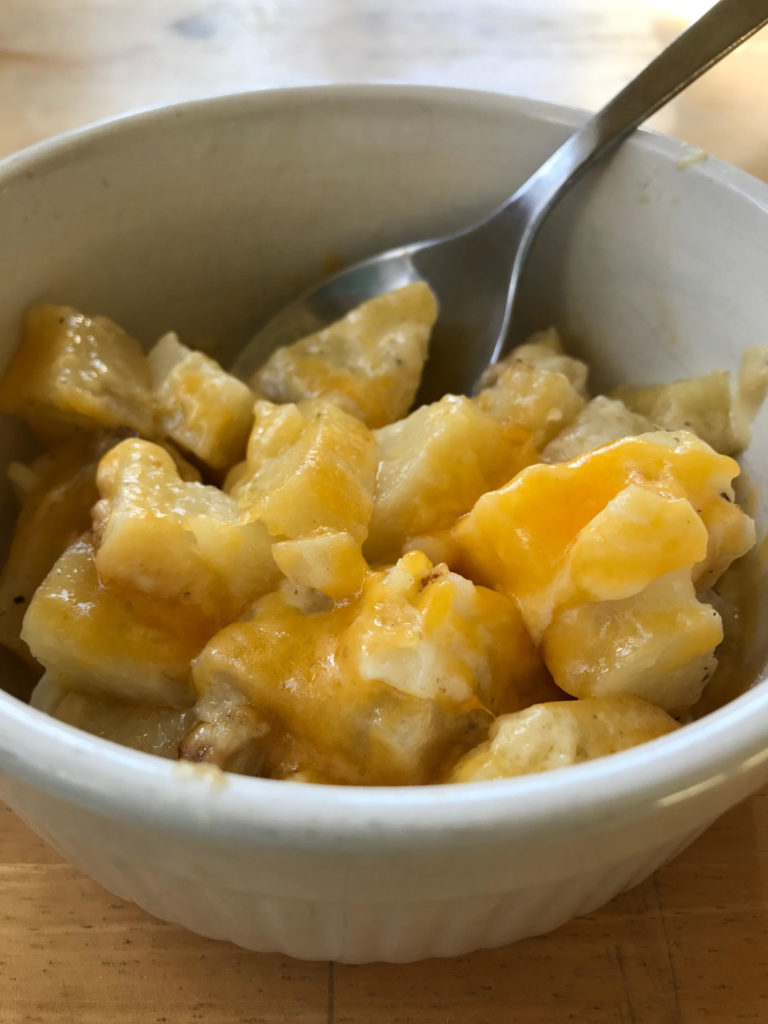 And here you go, these taste amazing! 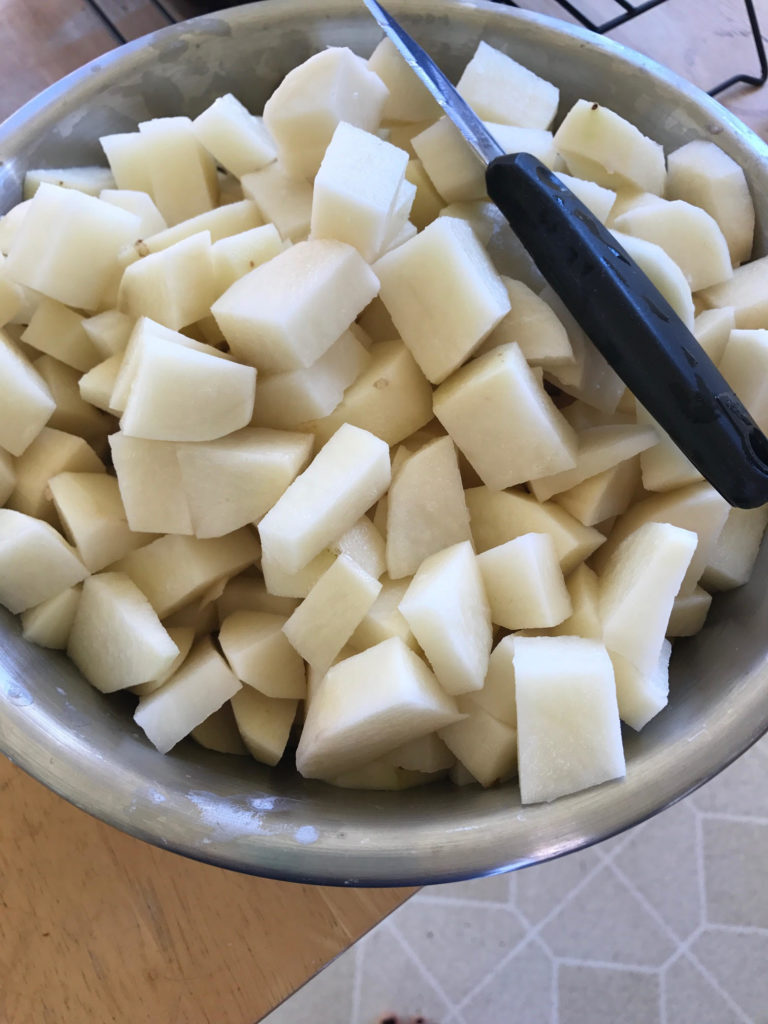 I like the way the potatoes are cut in this dish, very "user friendly" to eat!

Preheat oven to 400 degrees. Grease bottom of a baking dish with butter. Slice potatoes, then cut slices into fourths.
In a separate bowl, whisk together cream, milk, flour, half the cheese, minced garlic, salt, and plenty of freshly ground black pepper.  Place ⅓ of the potatoes in the bottom of the baking dish. Pour ⅓ of the cream mixture over the potatoes.

These are some recipes for au gratin potatoes that I've collected over the years from Amish cooks:

MENNONITE AU GRATIN POTATOES - This recipe comes to us from a Mennonite woman in Missouri.

Generously spray a casserole dish with nonstick cooking spray. If not using froz. hashbrowns, then cook 4 medium russet potatoes (unpeeled) till almost soft or use leftover baked potatoes Cut potatoes into ¼″ slices (or shred) and layer in greased dish. In saucepan over low heat (or microwave), combine 1 cup shredded cheddar cheese with ¼ cup butter, ¼ cup finely diced onion, ½ teaspoon salt, ⅛ teaspoon ground black pepper, and 1 ½ cup milk or fat free half and half (or 1 cup sour cream with half cup milk) till just mixed. DO NOT ALLOW TO BOIL! Fold this sauce over the potatoes. Sprinkle 2 tablespoon bread crumbs, ¼ cup shredded cheddar, and a dash of paprika on the top and dot with butter. Let set one hour, then bake uncovered at 350F for 45 minutes.

Interestingly, this is not called Au Gratin Potatoes but Potatoes Au Gratin.  This recipe is an old, old one given to me over 20 years go by an Amish woman.

It's a delightfully simple one which could give the Pioneer Woman's recipe a run for her money:

1 heaping tablespoon of flour blended with 2 tablespoons of butter

Cook the sauce ingredients together in a kettle until it forms a creamy sauce.  Add diced potatoes, salt, pepper, and paprika. Heat until potatoes are tender.