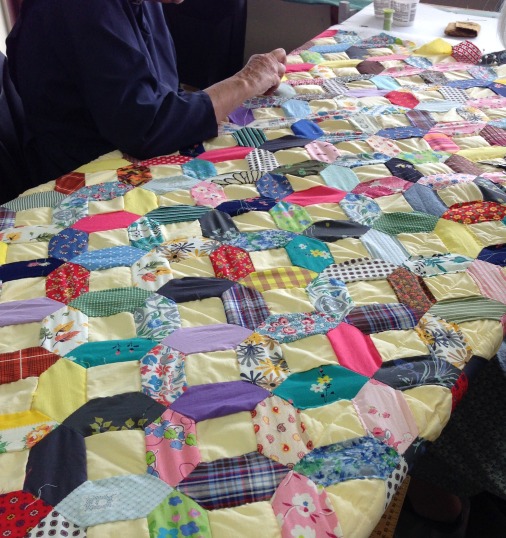 Alma Sue's Quilts is a place in Pinecraft, Florida to go and watch Amish quilters in act

Since most of us up north are still plunged in the deep freeze and having cabin fever, I thought I'd give us all some "warmth" this week by exploring "Pinecraft" the Amish haven for snowbirds in western Florida. I posted a story last year about Alma Sue's Quilt shop in Pinecraft, one of the few places you can go and actually watch Amish quilters practice their craft. This week I caught up with store owner Ella Miller Toy, owner of Alma Sue's Quilts, to ask her more questions about Pinecraft.  Check out Alma Sue's website here!

AMISH365.com How has Pinecraft Changed?

AMISH365.com Has Recent Media Glare Impacted Life in Pinecraft?
Answer: It hasn't really impacted the Village. Most of the footage filmed in local establishments was left on the cutting room floor. For instance, four hours were spent filming in my shop, the shop was not mentioned in the show. Same thing for other establishments. Some residents were offended and had a strong reaction against the filming, others were neutral. Those who were most strongly offended and vocal were the folks who do not have TV and did not see any episodes. The actors repeatedly told us they had a "script" to go by and often had to act out and say things they did not like and normally would not have said. My objection is that the show had an opportunity to portray Pinecraft in a positive light and they did not do that. Excessive filming was done in bars and night clubs which is not the normal routine for these folks or for those in Pinecraft.

Amish365:  Do you worry that Pinecraft will overdevelop and lose charm?
Don't think charm will be lost as long as Amish come to Florida for the winter, and I do not see that decreasing. The city is actively trying to retain the good parts of Pinecraft. The Sarasota tourist bureau this year is promoting Pinecraft as a Sarasota destination. Not sure what will happen if hoards of busses arrive. Most of the folks from busses come to eat at restaurants and shop in restaurant gift shop. My quilt shop gets some spillover from restaurant, but not a lot. Unfortunately most folks shop in the restaurant gift shops where ALL the products are made in China! Many do not realize the cheap quilts they buy there are from China or India. The Amish furniture store next to restaurant does same thing. Sells cheap quilts from China to put on their expensive hand made beds. I think this is misleading the customers because they ASSUME because it is an Amish village and beds are hand made then the quilts are also made here. My pet peeve.
We are the only place in Pinecraft where quilts and other textiles are made by local or nearby Amish and Mennonite ladies.
Don't think it will lose charm like Berlin in Ohio since there are not that many places for tourists to shop. Essentially they come here to eat.

Favorite aspect is the friendliness and kindness of the folks who quilt at my store and the quilters who shop here. Also nice because I have many cousins scattered around the USA, and I never visit with them until they spend time in Florida then we get to catch up. Like the aspect of meeting many people from around the world, especially Canada, the UK, Europe and now more and more from South America. Pinecraft is a true melting pot. Different Amish sects who cannot agree on religious fine points up North all meet in Florida and worship together and the religious differences don't seem to matter here.