Aster suggested we “make up” our own recipe for cookies. I was doubtful at first, I mean, baking isn’t something like cooking where you can just necessarily throw in this or that and expect it to turn out. One false move with butter or not enough baking soda can tank a perfectly good recipe in a hurry.

But we talked about it some more and she persuaded me. I figured it would be a good learning experience for all of us. Aster said she would write the ingredients down step-by-step as we put them in.

And we tried to sort of keep the flavor profile “Amish “meaning basic ingredients. I told Aster and Beatrice that they could pretty much add anything they want, but there were some dealbreakers. For instance, we had to start out with the basics building block ingredients that almost any cookie would have. That included flour, baking soda, eggs, milk, then I told them they could basically adding anything they wanted to from there. I let them choose the amounts, Aster and I battled over how much sugar. I suggested 3 cups, she suggested two. I still think I would’ve been correct with 3 cups, but we went with two. Helped that we were generally in agreement on the other ingredients and amounts, for instance, half a stick of butter.
One twist that Beatrice suggested was interesting: chocolate milk. ( I linked to a homemade recipe, but we used store-bought chocolate milk) In the end, I don’t know that you could taste it or that it made that big of a difference, but it certainly didn’t do any harm either.
I could tell by the time we were done mixing up the batter that we might have a winner, the batter held together really nicely.

We grate softened butter and added it to the mix.

We used fresh eggs from our neighbor's chickens.

Aster peeks out from behind the Cheerio box, the girls were both beaming at their successful cookie recipe!

We decided to wait until after the cookies were done to come up with a name. The girls decided upon the name, Chewy Cheerio Crunch Cookies. I mean, the girls put a lot of "extras" into these cookies. We put in some melted mini-marshmallows, those didn't really work. The addition of Cheerios, I think, was a great idea, added some fun crunch to the cookies. There's enough chocolate in the recipe to make the cookie sweet (I would have added more sugar, but the cookie is great as is), but it's not overpowering. These cookies turned out very well. And, wow, I dunked one in milk (at Aster's suggestion) and, that was a super good combination!

Okay, here is the recipe as Aster wrote it.... 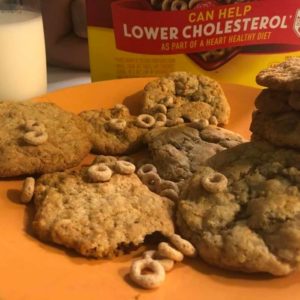