Some people are natural extroverts.  You meet them for the first time and you feel like you've known them your whole life. They are warm, welcoming, back-slapping buddies from the get-go and they really know how to have seamless, friendly exchanges with strangers.  I always wish I was like that, but extroversion is not my natural setting. I tend to be shy and you really have to spend some time with me to get to know me. Wish that weren't the case, but that's just my reality. Shyness is something I've battled my whole life but, like anything,  the trait can be reduced, it just takes work.  As a journalist it is my job to talk to strangers, but I still struggle, especially when I'm just cruising through Amish country like I was yesterday in Daviess County, Indiana.

Daviess County is probably one of the largest Amish settlements that I've never really explored.  Samantha Bobbitt, the tourism director there, told me beforehand that there were some 800 Amish families that call the county home.  That is a huge settlement!   My visit yesterday was quick. But I still met some great people, made some new friends and captured some wonderful scenes and I'll be sharing them with you over the next week.

I was exploring the grid of gravel roads criss-crossing the countryside north of US 50 when what looked like an Amish school caught my eye.  But the building was wedged into a corner lot and didn't really look like many of the Amish schools I have seen.  What resembled playground equipment caught my eye and then  children milling about the small school yard.  In addition to just shyness, there is also the issue of respect. I don't like to bother people if they are working and I don't like to approach unattended children.  No one wants some middle-aged man stopping their car and chatting up their kids.  So despite my curiosity I decided to pass this scene.  Then I got thinking. It was around 6 p.m. on still the last day of July.  Odd time for a school to be in session.

I mentally kicked myself and said "Kevin, this is your JOB, you HAVE to go out and talk to people and get the story."   The reality is that most people - Amish or not - if you show up, are respectful, have some genuine and sincere curiosity, are going to be friendly and welcoming.   After initially passing the school, I thought, you know I'm really curious as to what they are doing, so I am going to turn around and ask. So I threw my car into reverse (watching first in the rearview mirror for any approaching cars or buggies), pulled alongside the road and sought out one of the adults.  I quickly told him who I was and what I do and he was immediately warm and friendly.

"School starts two weeks from Monday so we're just in here getting the place ready," he explained, a friendly Amish man with a bright red beard.

He explained that there are close to 30 church districts in Daviess County, but maybe half that many schools.  In this particular school, 68 students will call the building their school home for the 2014-2015 school year.  There are other questions I wish I had thought to ask, mainly about the building itself.  It's sort of a sprawling building, not what you typically think of as a "one room" Amish school, or even "two-room" Amish school.  But he was working and I didn't want to bother him so I kept the exchange short. I asked if I could take some photos of the school and he generously said I could "help myself."

"Is it it made of aluminum?" I asked.
"Stainless steel,"  he replied.

I thanked him, took my pictures, and headed on my way, happy that I pushed aside the shyness to get the story and the shot. Just wished I had asked more questions! 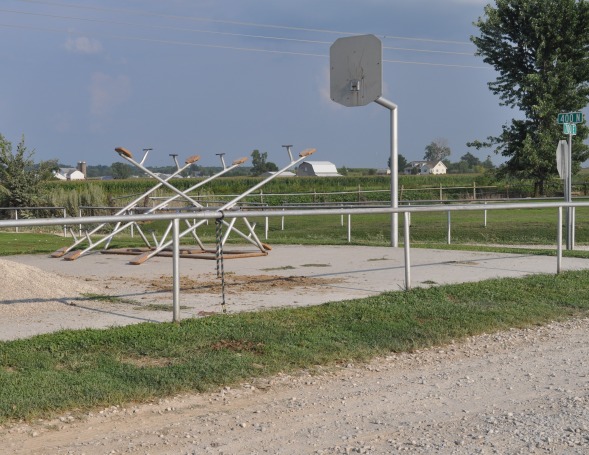