Macaroni salads are staples of summer.  In Amish kitchens, there are few things that say summer more than a macaroni salad with a hint of crunch from some freshly grown celery or onion chopped in.

As the name of End Of Summer Macaroni Salad implies, you can use anything from your garden to mix in with this salad and the amounts listed below are approximations. If you like carrots, you can increase the amount, or if you are like me and don't care for them much, you can reduce the amounts. My wife's Aunt Sharon made this salad and really combine the crunch and color to come up with a salad that is perfect for the end of summer when your garden is overflowing with goodies.

One thing I like about this End Of Summer Macaroni Salad is the recipe isn't a sweet one. So many Amish macaroni salads are laden with sugar, this one isn't.

This is not the best photo of boiled macaroni in the world, but, yes, boil it. My grandma always put some salt and oil in her pasta, so go ahead and do that as a way to pay homage to my Italian lineage!

This sauce, a combination of mayo, ranch, and sour cream is so good and, I tell, you, if you leave the whole salad in the fridge overnight, the flavors will really pop as everything melds together nicely.

I had a red pepper on hand and added some. These everything-but-the-kitchen sink salads are popular in Amish kitchens because the recipes are very versatile.  I mean, the only thing I might not add to this if it is going to sit in your refrigerator for a few days is tomatoes just because they'll get mushy and, yeah, in general refrigerating tomatoes degrades flavor.

Is it harmful to eat cauliflower with black spots?

No, these are harmless...the black spots are caused by oxidation from a long time in storage, obviously if you use fresh-from-the-garden cauliflower that wouldn't be an issue.

These are my veggies: broccoli, carrots, cauliflower, you can get them from your garden, or buy them. SIGH, note the blackness on the cauliflower, this is not mold, it's generally oxidation, not pretty, but harmless.

Should use refrigerate tomatoes?

In most cases, the answer is no. Refrigerating degrades the flavor.

This, as an aside, is frustrating to me because I love a cold, sliced tomato.  But, my wife is always telling me not to refrigerate them because it degrades the flavor (which again buttresses my belief that any food that tastes good, there will be some reason why you aren't supposed to do it).  Anyway, many websites, journals, etc talk about how you shouldn't refrigerate tomatoes.  So, you can read more here.

Anyway, back to this recipe, you can definitely throw anything you want from your garden into it. I mean, the recipe below says nothing about onion but don't know why you couldn't add some onion, artichoke, cucumber, radish, peas or whatever else you have.  Still, I used the recipe as is below (with the addition of some chopped red pepper mainly for color) and it was great.  It's the combination of mayo, sour cream, and ranch that makes it.  And, yes, these dry mixes are popular among Amish homemakers, largely because they'll keep for a long time and they can just deploy when needed.

My verdict on this salad is a good one. If you are looking for a savory salad that is colorful, flavorful, and easy, this is is a great bet. You can make it lower cal by cutting the amount of shredded cheese and cutting back on mayo.

I think you could add some black pepper to it for those of you who want maybe a little bit more spice to it. I was fine with it, though, as is. 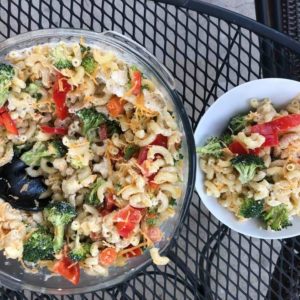 Tried this recipe?Let us know how it was!
« The Amish Cook: Amish Chicken Supreme Casserole
Classic Amish Strawberry-Rhubarb Pie »