The Amish generally don't deck the halls with boughs of holly, but they do often cram the kitchen with tastes of jolly around this time of year. Food is one area where many Amish do celebrate the season, whether that be through fudges, cakes,  cookies, or pies.  Here is a round-up of five holiday favorites if you want to add a taste of Amish to your holiday menu!  A couple of quick hints to make the five recipes below more "user friendly."  If you see a recipe you like, I recommend highlighting it, copying it and pasting it into a word document and then printing it out.  If you try to print out this page, you'll get a bunch of ads with it also and you'll use up all your toner. So just copy and paste.  And on the cinnamon hard candy recipe, one ingredient is for cinnamon oil.  That one is tough to find, but I have seen it in Amish bulk food stores.  These five recipes to come me from far and wide.  The molasses cookie recipe here has been very popular and comes to me from an Amish family in Tennessee.  "White Christmas" pie is popular among the Amish and was featured in one of Amish author, Wanda Brunstetter's, books. 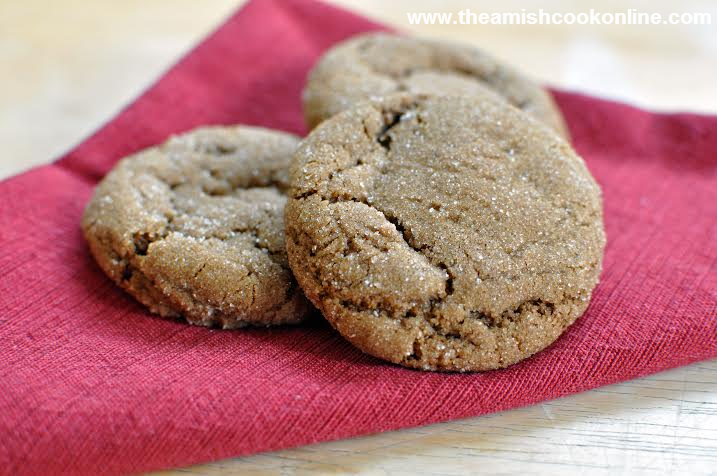 While the above mixture is cooling, beat 3 egg whites, cream of tartar and sugar till stiff peaks form.  Set aside.

Also during the cooling period, beat whipping cream till it is stiff.   Set aside.

Transfer the cooled mixture into a very large bowl.    Carefully add the beaten egg whites and the whipped cream.  Fold together.

In a large heavy saucepan, combine sugar, water and corn syrup. Bring to a boil over medium heat, stirring occasionally. Cover and cook for 3 minutes. Uncover and cook over medium-high heat, without stirring, until a candy thermometer reads 310° (hard-crack stage). Remove from the heat; stir in oil and food coloring, keeping face away from the mixture as the odor with be very strong.

Immediately pour onto a greased baking sheet. Quickly spread into a 13-in. x 9-in. rectangle. Using a sharp knife, score into 1-in. squares. Re-cut rectangle along scored lines until candy is cut into squares. Let stand at room temperature until dry. Separate into squares, using a knife if necessary. Yield: 1 pound.

Combine first three ingredients and bring to a boil. Mix rest of ingredients and put in pan and pour first mixture on top. sprinkle nuts on top and bake at 350° F. for 45 minutes. Cool. Top with whipped topping