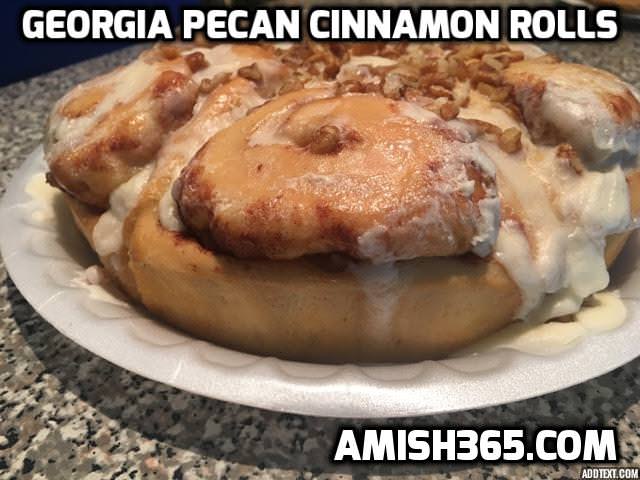 Georgia Pecan Cinnamon Rolls, a staple of the Montezuma community. These are from Yoder's bakery.

So, I sent my parents to Montezuma in search of the Amish cooking “Holy Grail” of the South: Yoder’s Restaurant.  There are several Yoder’s Restaurants in the USA, all independently owned. Yoder’s is such a common name among the Amish that it’s just coincidence.  But there is a Yoder’s in Mount Hope , Ohio (my favorite), a Yoder’s in Sarasota (my close-second favorite), but I think there are also Yoder’s in Arthur, Illinois and Middlefield, Ohio.  I think my bucket list has a clause in it that I need to try as many of these places as I can before I head for the Pearly Gates hopefully many years from now. 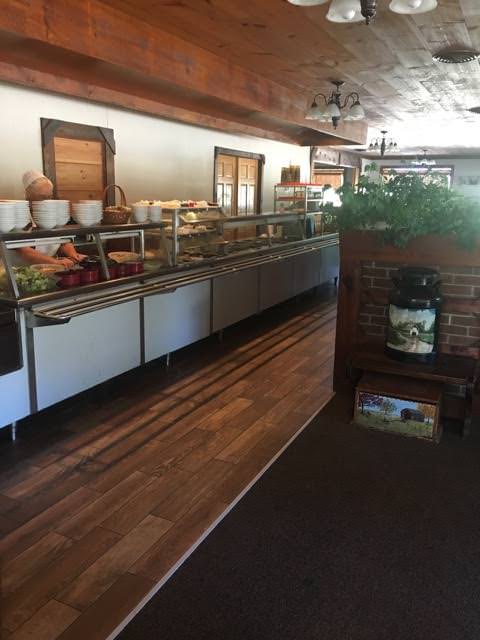 This is the cafeteria-style set-up of Yoder's.....my parents missed the day's opening by a mere 30 minutes, but the bakery is apparently open earlier.

Now I love my parents and when you get into your 70s my view is you can pretty much darn well do what you please, but they committed Amish culinary blasphemy in my book.  They arrived at Yoder’s 30 minutes before the restaurant's 11:30 a.m. opening and decided that they didn’t have the time to stick around (they were on their way to visit friends in Florida) and that it would have just been too much food for the two of them to consume.    Okay, well, you know….on the first count, I could be on my way for a meeting with the President or the Pope or the Queen but if being just a little late meant I could have eaten at Yoder’s in Montezuma, I’d keep them waiting.   On the second count, well, maybe that is why my parents are more successful at keeping pounds off than I am.

The recipe below is for pecan cinnamon rolls similar to what you see in the photo, it isn't the exact same recipe but this is a recipe that is popular in Amish homes in the South where pecans are king.  The pecan cinnamon rolls came from Yoder's Bakery which has earlier hours than the restaurant.

I would have loved to have seen some of the menu items at Yoder's because it probably would have melded southern cooking with traditional Amish fare.  Since my parents didn't get to sample it, here is a link to an article that gives more of a flavor.  Below is a recipe for Pecan Cinnamon Rolls, one of the Amish meets Southern cooking items Yoder's is famous for.