On this website we focus a lot on the Amish and Mennonites, the two main branches of the Anabaptist faith. We also talk about the Brethren (German Baptist) church which originates from the Pietist movement but shares many similarities with the Anabaptists.  The Hutterites, though, are the third branch of Anabaptistism.

The Hutterite faith is quite similar to the Amish and Mennonites, with the main difference being that they live communally.   Hutterite colonies are spread throughout Montana, Minnesota, the Dakotas, and Canada. I was aware of a Hutterite colony in Africa and, I think, one in Australia. But Japan?

Shinto and Buddhism are the primary religions of Japan, so finding a Hutterite colony here is surprising.  Not surprisingly the colony is located in a remote corner of the country and it's unlikely the casual traveler would stumble upon it. 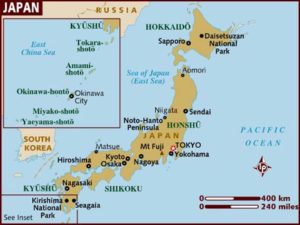 The Japanese Hutterite colony is comprised of ethnic Japanese (so unlike most Hutterites they do not speak German) and it sounds like after a robust run that there is not much of a future left for the colony.  But, wow, how fascinating from a cultural and anthropological standpoint it would be to visit.  Click here to read about the dwindling Hutterite community in Japan.