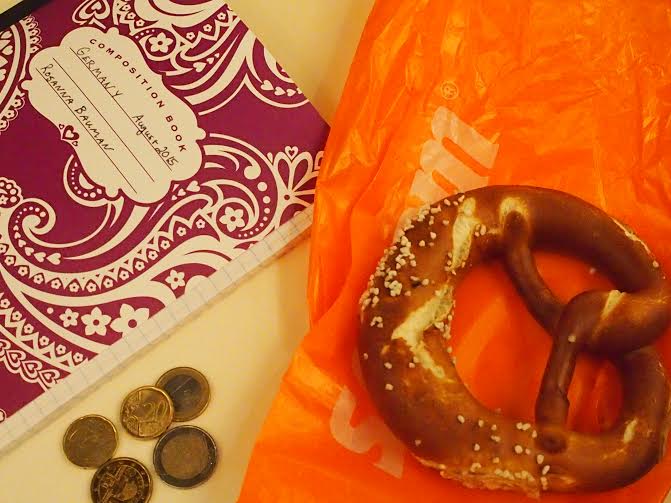 Pretzels, trip diary and coins are indispensable in Europe 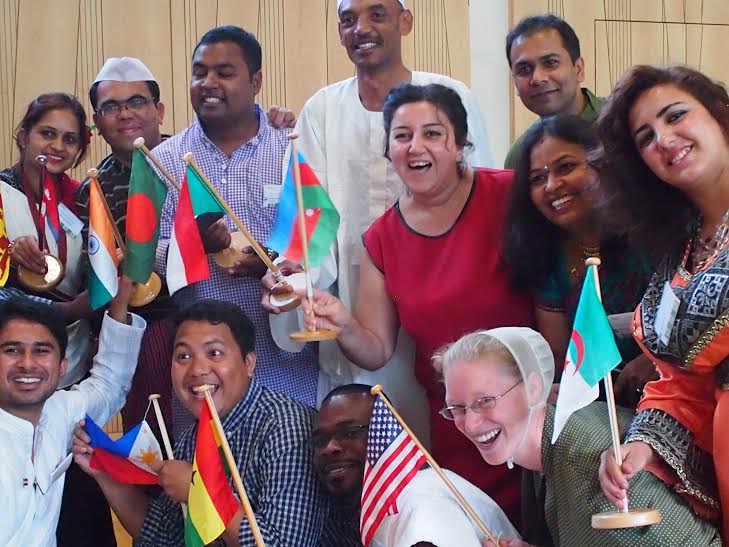 Rosanna and some of her international friends

When spring is so far away  that  it’s just  a dream,  and  all you  have to  entertain  yourself  is tax  paperwork, that’s when you get cabin fever. I start recalling warmer weather and ruminating on my past summer adventures. I still haven‘t gotten done processing all of my experiences from my August trip to Germany. So here‘s the continuing saga, if you want to armchair- travel with me...

It's departure day at the Herrsching House of Bavarian Agriculture, and everybody is tearfully hugging classmates that we've bonded with in our 2 weeks together. Several of us board a bus that will take us to the Munchen airport. Others are waiting for later buses or trains to travel home. Although I'm not flying out, I chose this bus as it will take me to the far side of Munich faster than  the  train.  It’s 8:30  AM,  and  my  friends  from  home  are just  landing  in  the  Frankfurt airport. They‘ll take the long-distance train into Munich, where I‘ll meet them this afternoon. But until then, I have six hours to scratch off the top thing on my Germany Bucket List: Eat a Regensburger sausage from the Wurstkuche.

Clear back in April when I was planning this trip to Germany, I told my travel agent that the main thing that I wanted to do in Germany outside of my class hours was visit a really good sausage maker. Tim said that I absolutely had to go to the Regensburg Wurstkuche: the oldest sausage kitchen in the world. Regensburg is a UNESCO World Heritage Site about an hour and a half from Munlch vla traln. And so, I determined to go.

Thankfully, two of my classmates lived in Regensburg, instead of blazing my own trail, I‘ll just follow them home after the bus deposits us at the airport. I am so grateful that Demitri and Anna invited me to travel with them, as they have a strategic plan that will save us travel time and transfers. First, Demitri purchased a group ticket for us that reduced our fare from $28 to $12 each. Now we will catch the  bus to  Freising and then  hop on the  Deutsch-Bahn  to  Regensburg.  Feeling  very  clever  for  this  travel  scheme,  we arrive at  the  appropriate  bus stop  and  find  that  we  missed the Freising bus by 3 minutes! There’s another in 17 minutes, but we  can  ill-afford  those  minutes as we  must  catch  the 10:00 train from Freising  in order  to  be in  Regensburg  by  noon. We sit on our  suitcases  in the  hot sun  and chat.  Demitri  hails  from the Ukraine and Anna is from Russia, but both speak clear English. We all have a goal to be in Regensburg by noon, as they want  to  get  in  a  half day  of  work  and  I  need  to  get  there  so  I  can get  back  to  Munchen  in  time  to  meet  the girls. The bus arrives and we waste no time boarding. However, we only make a mere 200 feet of progress before finding the road blocked by an empty taxi car. Our driver has much to say about this, and lays on the horn. This bus should have gotten  us to  the  train  station  five  minutes  before the  10:00 train,  but eight  long  minutes  tick  by  until a taxi  driver appears and moves his car. I begin praying that the train will be late, because if we miss this train, it will be an entire hour before another comes,  and that means  I  might as well  have stayed  in  Munich. We  roll  into the  train  station  one  minute after 10:00. The three of us barrel out of the bus, down a flight of stairs and up another, dragging our luggage to the tracks and peer anxiously at the message posted above our track: Train delayed four minutes. Hallelujah! Answered prayer, I have no doubt. We even have time to catch our breath! Once on the Regio, however, more bad news. Demetri interprets the rapid-fire PA announcement: ”Construction on the tracks, so we‘ll have to debark and board a bus for the last  half of the  trip."  This  will,  of course,  take  more time.  But the  worst  of  it  is that  I‘ll have to  do this  train-bus  transfer by myself going back to Munich. And  I  already have a track  record for missing my German travel connections!

Finally, fifteen minutes  before  twelve,  we  arrive  in  Regensburg. Because  of  the  track repair,  I  need  to  catch an earlier train back, so that means that I have just over one hour to explore Regensburg. Anna is a tour guide at the Regensburg castle, unfortunately, I won‘t have time for that. But they give me several tips to help streamline my visit.

While Demitri helped me locate the luggage lockers, Anna fetched me a map of Regensburg and pointed out the direction of the Wurstkuche, five blocks away.

I waved goodbye to my wonderful guides, turned around, and hot-footed to the luggage lockers. I could feel the clock ticking. Oh, No. Not enough Euro coins to feed the $4 locker. I‘ll have to break some bills. I scurry into the station, but the ATM is out of service. I drag my luggage into the gift shop. Ah! A postcard that only costs .50 Euro! I pay for  the postcard with a 20 Euro note and rush back to the lockers with a fistful of coins. Plunk! The suitcase and one backpack goes in with lightning speed, and I sling my remaining backpack on and take off on a trot for the Danube River. A trotting "Amish" girl  in the  middle of a touristy  city  definitely  gets  some  curious  glances,  but  I   kept  right on  going,  letting   them wonder. I wend my way past houses that are so historically picturesque. It feels surreal. Regensb‹ rg was established as a walled city in the Middle Ages, and some of the walls and architecture remain. I trotted around the massive church with the incredibly tall bell tower under restoration. Down another narrow street - there is the six story grainery beside the bridge and the deep blue Danube.  And nestled in its shadow is the Wurstkuche!  Stay tuned for Part II.