NBC has a new "documentary" unit called "Left Field" and they recently decided to tackle the Amish.

First, though, a bit of background about Left Field...they seem to be positioning themselves as an edgy, hip hub for micro-documentaries that sort of push the boundaries. All of that, I like.  And, you know, this "Amish documentary" wasn't awful but I do think it was a bit lazy.

The documentary relied on Sherry Gore as the main source. Sherry is a mid-life convert to the Amish-Mennonite faith who resides in Sarasota, Florida most of the year.  I genuinely like Sherry, she's about as warm and hospitable person as you'll find.   And the information she conveys in the documentary is not inaccurate, so maybe that is all that matters.  I just think NBC could have done a better job of finding someone who might be representative of more Amish.  Yeah, in rewatching it, I don't have a bit of a problem with Sherry, she did a great job. I just think NBC's treatment of the Amish was very simplistic (but, in a six-minute documentary it's hard not to be simplistic)

The problem with filmmakers is that want someone Amish to appear on camera, well the vast majority just won't.  Its incompatible with their faith, so someone like Sherry who is a member of the more progressive and separate Amish-Mennonite church is a good "back up." 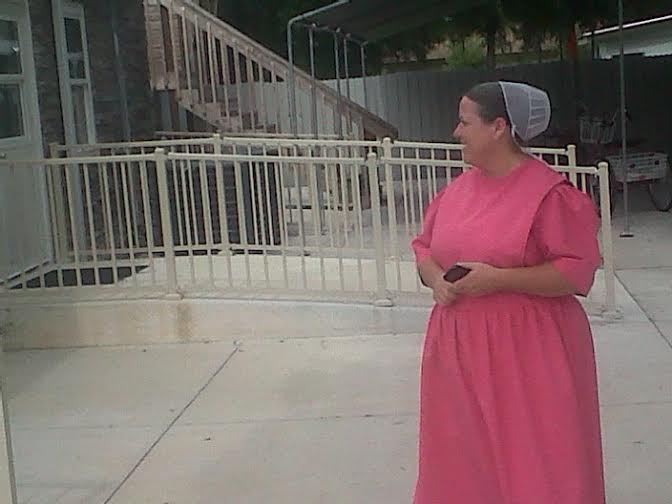 Sherry Gore, a very kind, hospitable, warm woman....but I wonder if NBC could have done a better job sourcing the documentary or giving just a sentence or two more background about Sherry.  This is a photo I took of Sherry when I met her in Sarasota.

Technologically, the Amish are changing and evolving, just like the rest of us, trying to figure out what works, what doesn't, what suits their lifestyle and culture, and what doesn't.  A lot of film-makers want to "catch the Amish cheating" on their "rules", but that is way too simplistic of a view.  The Amish are constantly changing.   Outsiders shouldn't snicker and say "gee, look at that Amish person, they are using a cell phone and they aren't allowed to."  Only the Amish can decide what they are "allowed" or not.

The problem with a documentary like this is, as Sherry rightly points out, the Amish are so, so different from place to place.  The Amish in the Conewango Valley of New York , for instance, would generally find smartphones anathema under any circumstance.  In Holmes County, Ohio?  Not so much...

So, was this documentary out in left field or not?