The rolling farmland outside of Trenton, Ohio is especially rich in tidbits of almost forgotten history.  There's the Amish farmstead at Chrisholm which I've written a lot about.  But there's more:

There used to be an island in the Great Miami River nearby that was home to Woodsdale Island Park, it was considered the Six Flags or Kings Island of its day: a sprawling amusement park on an island in the Great Miami River in the late 1800s.  The Great Flood of 1913 laid waste to the park and it never recovered.  Today, nothing remains.  But local historian Doris Page has a few glass goblets emblazoned with the words Woodsdale Island Park that have survived.

Then there's the bizarre "boxing match of Busenbark."  In what is now simply a dusty cornfield sandwiched between a high school and barn, heavyweight history was once made.  It’s a forgotten chapter.   How did such an obscure spot some 30 miles north of Cincinnati and in the middle of nowhere become the venue for such a celebrated fight?   In 1867 a ring rose in the cornfield for Mike McCoole and Aaron Jones (American vs.  British) to duke it out.  Fans and media descended from all over clogging up stagecoach lines and filling local taverns.    Here's how Ohioghosttowns.org described what happened at "Busenbark Station":

It was founded by Robert Busenbark (1793 - 1872) & Margaret (Stout) Busenbark (1788 - 1879) who moved to Ohio from New Jersey. They had a large farm & a couple of children. They donated land for a school in 1833 & along with one of their sons David (1819 - 1908), donated more land for a train station on the Cincinnati, Hamilton, & Dayton Railroad in the 1850's. A local farm was the site of a bare-knuckle boxing Heavyweight Championship Of America match between Mike McCoole & Aaron  Jones in 1867. Thousands of fans rode in on trains to catch the outdoor match. Busenbark also had a grain elevator & warehouse & a water pump station which supplied electricity for the railroad when it was converted from steam trains.

The "local farm" the piece refers to isn't the Busenbark farm but the Richter farm, another family residing in Busenbark.  There's very little online about the boxing match and how it came to held in such an obscure place.

Which brings me to the Richter scale....the ubiquitous criteria used to measure how hard a tremor is. And about the earthquake cookie.

According to Anne Jantzen who is active in the Friend of Chrisholm preservation group, here's a bit about "Earthquake Cookies"

"We have renamed the Chocolate Crinkle Cookie the Earthquake Cookie. Why? We have named them in honor of Charles F. Richter the developer of the Richter Earthquake Scale who was born on a farm here in Southwest Ohio. Charles happened to be the great,great, great grandson of Christian and Catherine Augspurger, Amish pioneers to our area. The cracks in the cookie look like cracks in the earth caused by an earthquake — at least we think so."

Charles F. Richter passed away in 1985, but his seismic scale lives on.

Interestingly, the founder of 4-H also hails from Trenton, Ohio and actress Doris Day spent many summers here visiting family back in the mid-1900s.    So it's a small, rather non-descript town now, but it has a rich trouve of secrets.... 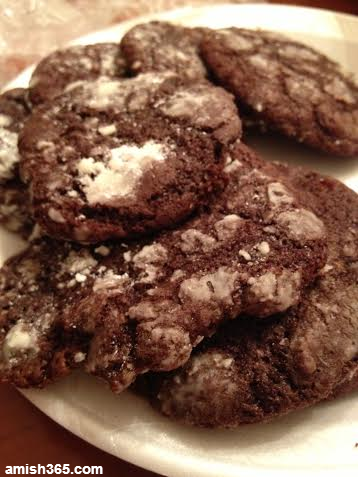