I found this recipe for Old-Fashioned Amish Cake in the archives of the Amish Cook. This was a recipe from Elizabeth Coblentz, the original Amish Cook.  Not sure why it is called "Amish Cake." And it is interesting how "Amish" is often attached to recipes but other religions are not. You probably won't find a "Catholic Cake" or "Methodist Cake" in most cookbooks.

Cake is a popular dessert for an Amish homemaker to have on hand. I’ve been to more than one Amish home before where I’ve been served a piece of cake, and I inquired as to what the occasion was for such a delicious cake? Only to be told that they always keep a fresh cake on hand in case company pops by.  Having a "cake on hand" shows the very social nature that is still a big part of Amish culture. If I think about it, there are very few people in my life that I would just “pop“ and visit without calling or texting ahead of time and asking if it is OK to drop by? I mean, even my parents I feel absolutely welcome to visit anytime, but as a courtesy usually, I’ll reach out by a text or something before I stop by.

Among the Amish, however, unannounced social visits are still very much the norm. It’s kind of a quaint custom.  My grandmother was another person that I just always felt completely fine dropping by without announcing ahead of time.

So, back to "Amish Cake"...If you look at the ingredient list this looks like a very basic cake that most any Amish homemaker would have the ingredients on hand for...so that is why they call it that...Anyway, here is the recipe for "Amish Cake."

This Old-Fashioned Amish Cake is very much in the tradition of a simple spice cake, with cloves, allspice, and cinnamon being main ingredients.

You can mix the ingredients with just an old-fashioned wooden spoon, a whisk, electric beaters, or a stand mixer. It'll turn out great regardless!

Delicious batter. I know, you're not supposed to eat anything with raw eggs, but I always ate a few spoonfuls of batter when I was a child. I'll leave that decision up to you. You aren't supposed to....

I would use this amazing brown-sugar frosting with the cake. 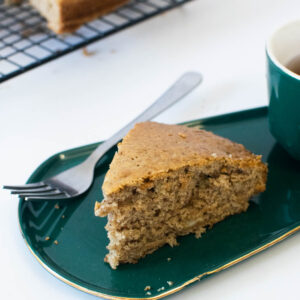