I had never heard of old-fashioned Amish Fasnachts (the spelling Fastnachts seems to be equally acceptable) until I was an adult. I think I first heard the term when an Amish Cook reader wrote into the original Amish Cook asking if she had a recipe for it.  She didn't and she hadn't heard the term, which was one more early lesson for me as to how widely varied Amish culinary customs are from community to community.

Amish in Ohio, Indiana, and points west do have very different customs and traditions, often, than those who live in Pennsylvania.  The reason for this is that Fasnachts are very much a tradition among the wider Pennsylvania Dutch community, so the Amish in Pennsylvania have been exposed introduced to them and incorporated them into their traditions.

The Amish as a whole do not observe Lenten traditions and fasnachts are typically a "Fat Tuesday"treat to indulge in before the more austere days of Lent. But the Amish, primarily in Pennsylvania, who were already skilled doughnut makers adopted the old-fashioned Amish fastnacht (recipe and historybelow)tradition.

This from a small newspaper in Pennsylvania a few years ago best illustrates the relationship between the Amish and fastnachts:

Members of the Newburg-Hopewell Fire Co. and the Amish community began their Monday morning by preparing the homemade Amish Fastnacht doughnuts for Fastnacht Day, Tuesday, Feb. 13, at the Old Fire Hall in Newburg. The doughnuts are sold each year to benefit the fire company.

They began at 5:30 a.m., preparing the dough, heating up the deep fryers, making the glazed icing, and making the center cream for cream-filled doughnuts, as well as the smaller pieces known as tidbits.

Verna Zook spokeswoman said, “We have been doing this now for several years as a fundraiser for the fire company. We, the Amish community, support and appreciate what they do as volunteers for the Newburg area residents.”

Newburg, I believe, is in what would be considered the "Big Valley" of Central PA.

As you move farther west Old-Fashioned Amish Fastnachts are less common among the Amish.  I'm fairly certain if you visited an Amish community in, say, Berne, Indiana and talked about fasnachts, you'd be met with a blank stare.

In addition to variations on spelling, there are also variations on fasnachts. The most common doughnuts seem to be plain or dusted with sugar. Some, though, can even be filled with cream.

Jessica made these fasnachts for us and they turned out perfectly. If you are, however, expecting some glamorous, fancy doughnut, these probably aren't it. I mean, these don't even have holes in the middle. But what they may make up for in not being the fanciest doughnut, they make up for in the rich tradition they are steeped in. So give these Old-Fashioned Amish Fastnachts a try as Lent approaches!

Do The Amish Observe Lent?

No. While Lent and its Friday fish frys are often thought of as a Catholic tradition, Lent is observed by most Christian groups, including Roman Catholics, Episcopalians, Presbyterians, Methodists, Anglicans and Lutherans.

Many Pennsylvania Dutch (an umbrella term which can include Catholics, Moravians, Presbyterians, Amish, etc in eastern PA) do observe Lent and the Amish are prolific makers of deep-fried doughnuts, so fastnachts became a natural recipe for the Amish to adopt, even though Lent is not observed. So while fastnachts are a PA Dutch tradition, the Amish are more associated by geography.

Do The Amish Observe Mardi Gras?

No. The Amish and other Plain people abstain from the festive activities of Shrove Tuesday and Mardi Gras. Lancaster, PA does not turn into New Orleans!

What is a "fastnacht?"

Pennsylvania Dutch is the language spoken historically in parts of eastern Pennsylvania. But that is actually a misnomer, it should be “Pennsylvania German." And the German translation of the word “Fastnacht “is roughly “fasting “which means going without food and "nacht" means "night"… So these donuts are most often eaten the Tuesday evening before solemn Ash Wednesday. You can go out with a bang on Tuesday night by pigging out on these delicious donuts and then fasting.

In more practical terms, they are often described as a "raised doughnut."

The ingredients are very simple. Stick with these unless you want to add maybe a teaspoon vanilla.

This recipe is pretty labor-intensive, or at least time-intensive, you have to let the dough rise overnight, about 9 hours in a glass or ceramic large bowl. A lightly buttered or greased bowl makes the dough easier to work with. Some recipes call for mashed potatoes in the dough, but let's just stick to the basics here.

You can, by the way, use a stand mixer with a dough hook or an electric mixer to mix up the dough. Or just do it the old-fashioned way by hand.

You can cover the dough with a thin towel and it does fine at room temperature.

Use a lightly floured surface or a well-floured board, depending on how sticky your dough is.

A sharp paring knife is good for making the circles or just something round! You do not need to make slits in the dough. You should get about a couple dozen fastnachts from this recipe. You won't get a slim waistline from this recipe.

You don't need a deep-fry thermometer when frying, you can just sort of tell. But 375 is the temperature the oil should be, a nice hot oil. You can use vegetable oil, lard, or even more offbeat oils like coconut or canola oil.

These will puff up to at least double. You can remove from the oil with a large spoon or tongs. Scraps of dough or leftover dough pieces can be fried too. The outside of the fastnacht with be golden and crispy and the center of fastnacht will be nice and soft.

Above is the fun part, you can create your own "fixin's bar" for the feast of doughnuts, rolling them in cinnamon sugar, regular sugar, powdered sugar, or homemade thick or thin glaze. Confectioners' sugar or a combination of confectioners is a great topping! Put the glaze onto not hot, but slightly warm doughnuts. Serve on a decorative tray. Wow!

Eat your fasnachts and then hunker down for Lent and the first fasting night. This is a great fastnacht recipe.

To make the Sponge:

The same Lancaster Online article also had the best Fasnacht tip I've read yet! The authors recipe makes 50 Fasnachts, which is bound to last a family quite a while (we suggest sharing with friends) but as they start to get a little stale.... cut them in half and turn it into a grilled cheese, cut side facing out! Butter and pan fry for a crunchy Fasnacht grilled cheese! 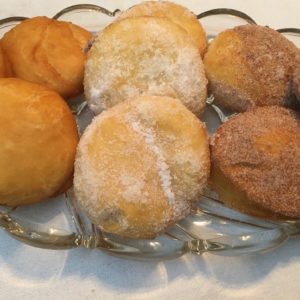 Fasnachts are very much a tradition among the wider Pennsylvania Dutch community, so the Amish in the area have been exposed to it and taken it up.
Print Recipe Pin Recipe
Course Dessert
Cuisine Amish

To make the Sponge:

To make the Dough