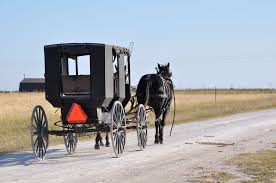 Can I paint this photo? A scene in the Amish settlement outside Beeville...

I've been a big fan of Cheryl McNulty's artwork which I've posted here a lot.  And that got me thinking: why not try?

Painting is something I’ve wanted to attempt before but never gave it a go.  Maybe I’ll be lousy at it, but maybe I’ll be OK.  Never know unless you try.  My father-in-law had given me an Amazon gift card for my birthday and after sitting in my wallet for months I finally decided to use it.

I’ve never picked up a paint brush in my life (unless you count little kid paint sets) and I wasn’t particularly good in art class, so I have no reason to think I’ll be any great shakes at painting,but at least it is something I can try and then cross off my list.  I thought it would be a good creative outlet, an adult hobby that I could pursue since most of the rest of my free time is spent with my kids (that is not a complaint).  Sooo, I ordered a $15 watercolor kit off Amazon (oh, what the heck, thought I'd stick in a link).    When Aster and I were getting home the other day, she quickly spied the package on the front porch.

"Dada, I want to help you open it!" she declared.

Oh geez, I thought, so much for the non-kid hobby. 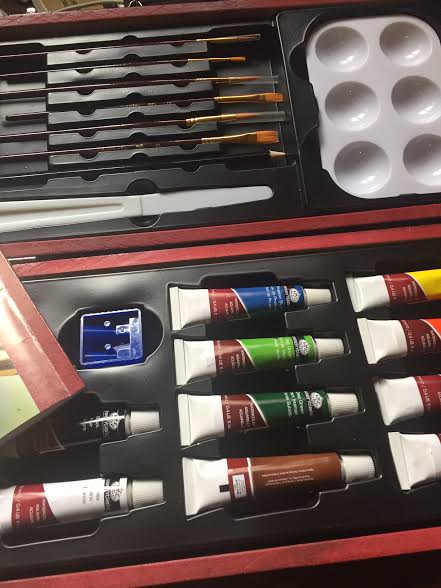 So I let her open the package as I explained to her that this was Daddy's "toy" and that she couldn't use these paints.  She could use her paint set while I used mine, that was a good compromise. She has a little kids paint set that she loves and dutifully got to work as I unpacked my sleek new paint set.

So, I thought the buggy photo at the top would be a good painting to start with because it just seems so simple...solid-colored sky, vegetation, and deep black buggy.   Still, I quickly realized that it's tough to master the perspectives and angles.  Those buggy wheels are what will probably really trip me up. The instruction manual recommends sketching your work first, which I started to do, but by then I was holding Beatrice. So as Aster painted next to me with her kids paint set and I held Bea in my lap (the notion of a kid-free hobby crumbled before my eyes) I sketched in pencil the buggy photo. Or attempted to.  It's not a good partial sketch, but I was also holding a baby, so I was doing it one-handed.  Not terrible in that context. 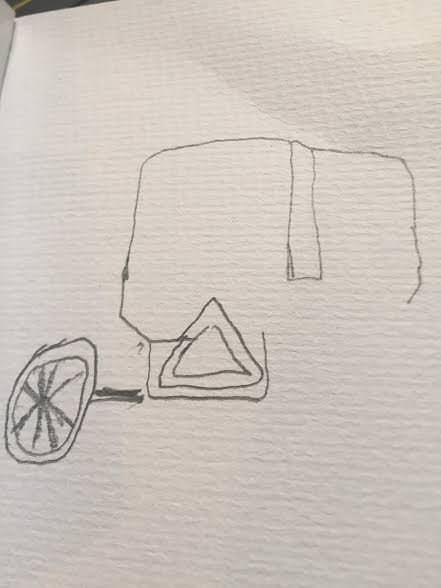 Next week I'll attempt to actually put brush to canvas (well, it's not actual canvas,but that sounds better) and see what happens and report back.