If Kansas, if the ice is thick enough on the ponds, we feel obligated to make the most of it, even if it isn't glass-smooth. The snow gave the ice a dimpled appearance, resulting in a very rough surface to skate upon. You have to use twice as much muscle to skate on the rough stuff, because you don’t glide very far. After several hours of skating on rough ice, however, our skates will pretty much shave off the big bumps. To a certain extent, the longer we skate on rough ice, the smoother it becomes. There ought  to be a life lesson in that, I suppose. 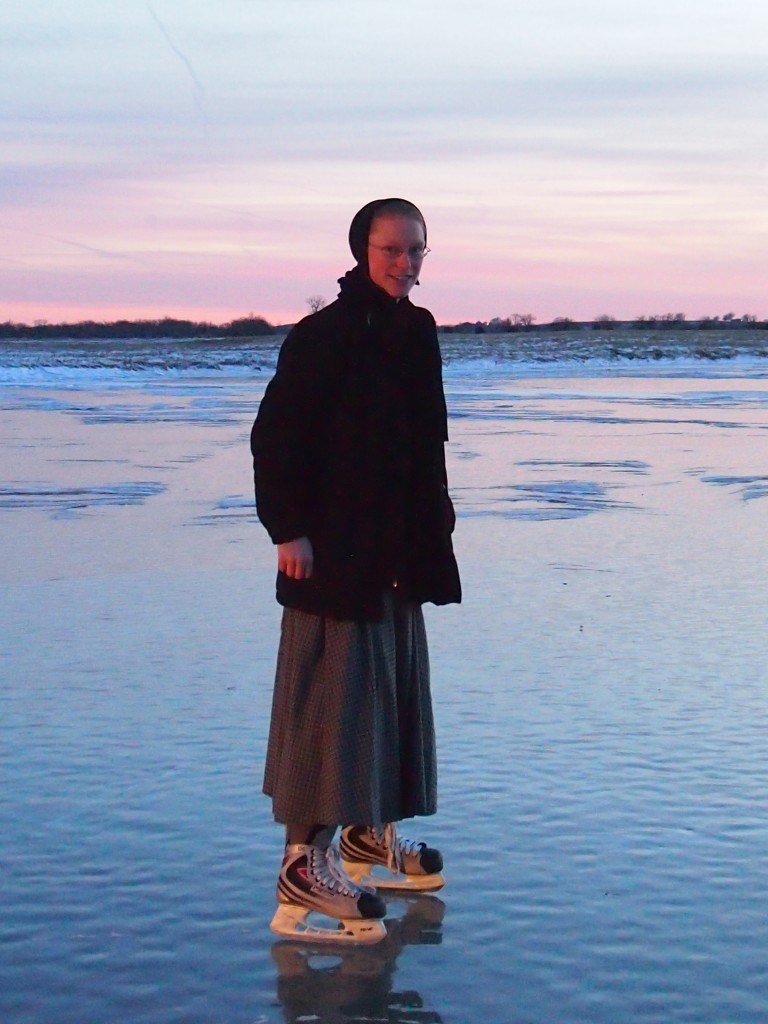 Rosanna is a firecracker on the ice who enjoys Fire Crackers

We really don’t skate roughly, but is a sport, so accidents happen. Just tonight one of the boys fell while playing Freeze Tag (aptly named in more ways than one) and split open the skin on his forehead. We had my uncle, who is a paramedic, superglue it shut. Sometimes an ankle is sprained (I did that last winter). The worst thing that has happened was 12 years ago when Marvin collided with a friend, breaking the fellow’s jaw.

In sounds a little funny but we just build a fire on the ice so we can just skate right up to it to warm ourselves. As the evening progresses the fire begins to sink a bit as the melted ice makes a pool around the logs. There’s always a jug of coffee and cocoa present at a skating but the cold water jug gets emptied first because the active skaters  re-hydrate after working up a sweat. Sometimes a pan of brownies or cookies will appear which we make sure are situated away from the smoke. Once we didn’t pay attention and smoke drifted over the food table giving t cookies a campfire smoke flavor.  Those were terrible cookies.

A quick snack that is always popular at the skating are the “Fire Crackers.”   One doesn't really crave sweets in the cold winter atmosphere but the carbohydrates and the heat of the Fire Crackers is a nice combination. But that is just the nature of those Fire Crackers. They show up everywhere, for any occasion, and the container gets cleaned out.  On “dressing day” we will serve Fire Crackers in place of potato chips because they are more popular. Nearly any soup is elevated by crumbling Fire Crackers into it, or simply serving aa a side in place of bread,   Fire Crackers made an appearance at our large Bauman Family Christmas gathering and we served as a snack right alongside the homemade chocolates.  The Fire Crackers were eaten first.  Part of what makes those Fire Crackers so popular is that they are so simple to make.  Fire Crackers are a last-minute finger food that you can throw together from pantry ingredients you already have on hand and that is guaranteed to get devoured.