I live in an old Rust Belt mill town between Dayton and Cincinnati.  From my perch in southwest Ohio I've studied the Amish all over the country.  The closest Amish to my hometown are about 50 miles away....there is a sizable Amish community in Wayne County, Indiana and Highland County, Ohio.  Even closer - perhaps 40 miles north - is a horse and buggy German Baptist community.  And about 8 miles away from me is Chrisholm Farmstead, a defunct Amish community that hasn't seen horse and buggies since the 1800s.

But lately a thread on Facebook of hometown news has been full of chatter about an "Amish buggy" seen in town on multiple occasions recently.

At first I brushed off the chatter as misinformed, people were seeing a parade participant or some sort of other novelty.  I've lived in this town my whole life and never seen a horse and buggy on the streets unless it was for a parade.  But then people started posting photos and, sure enough, it looks like a typical Amish buggy (now I feel like the only person in our city who hasn't seen the buggy).  Apparently the gentlemen visits a few regular spots in town for errands and then melts away into the countryside.  His trail seems to grow cold once he gets outside of town.

Amish visitors to my hometown are not unheard of.   In fact, I posted a few weeks ago about an Amish carpenter crew I spotted in town putting up a pole barn for the city.  But a buggy in town?  Never.  Until now.

I don't want to invade the visitor's privacy or in any way disrespect his presence but I am curious about him.  I'd be super excited to have an Amish presence in our area.  If I had to tap my expertise in this area - and I'll eat as much as needed if I am wrong - I would say this is a probably a homegrown local convert to the Amish.  Our section of Ohio has none of the typical characteristics that would attract an Amish community.  I suppose this could be a family in the first phases of planting a church near here, but I just can't fathom as to where or why.  An area 15 - 20 miles northwest of where I live - Preble County, Ohio - would seem to be hospitable for the Amish but there is such a large Brethren community there that I doubt Amish would move in.

Here are some pictures of our Amish visitors that I lifted from the Facebook thread, I don't feel like any of these photos are disrespectful, you can't see a face.  So, does anyone know anything about this Amish presence near Middletown, Ohio? If so, I'd love to hear from you! 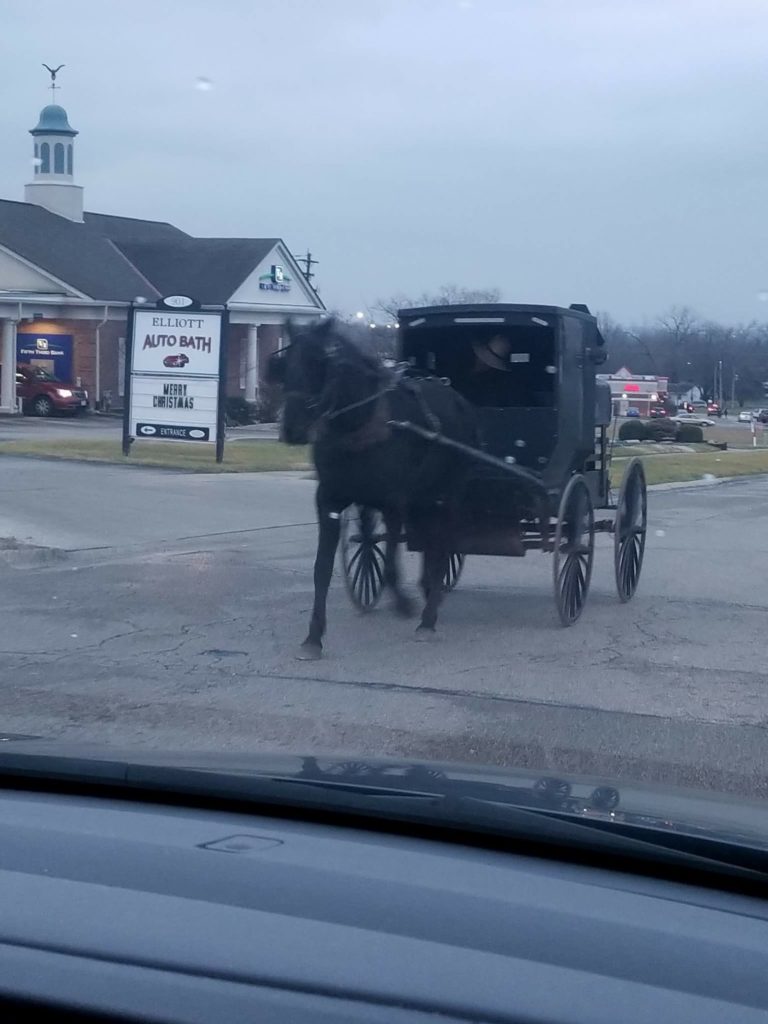 The buggy on a busy side street near Tractor Supply. 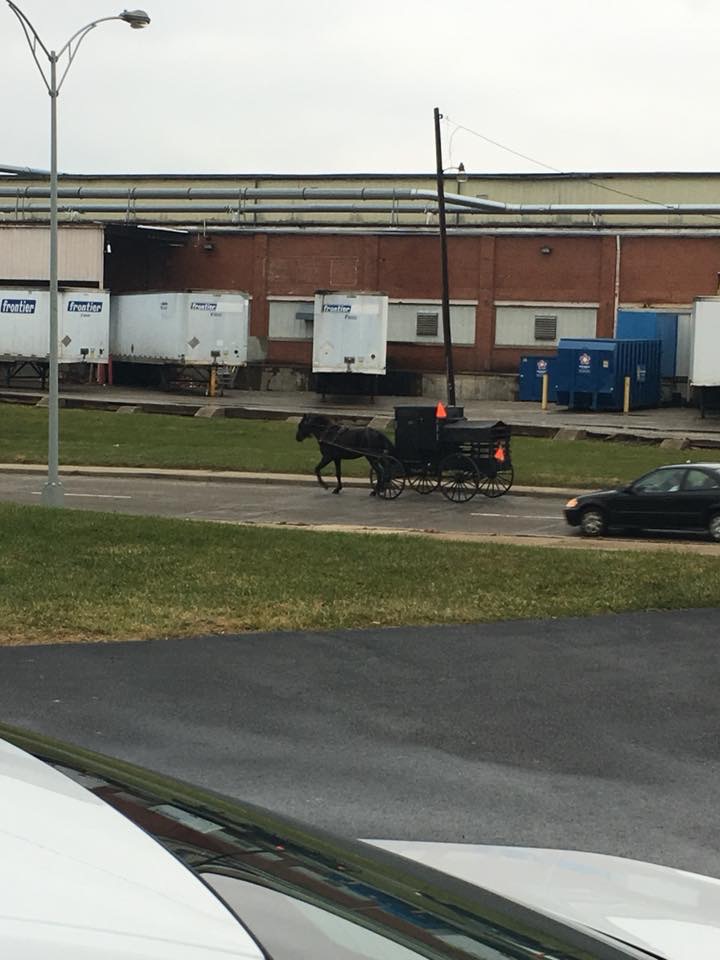 The buggy on a busy thoroughfare near a trucking company. 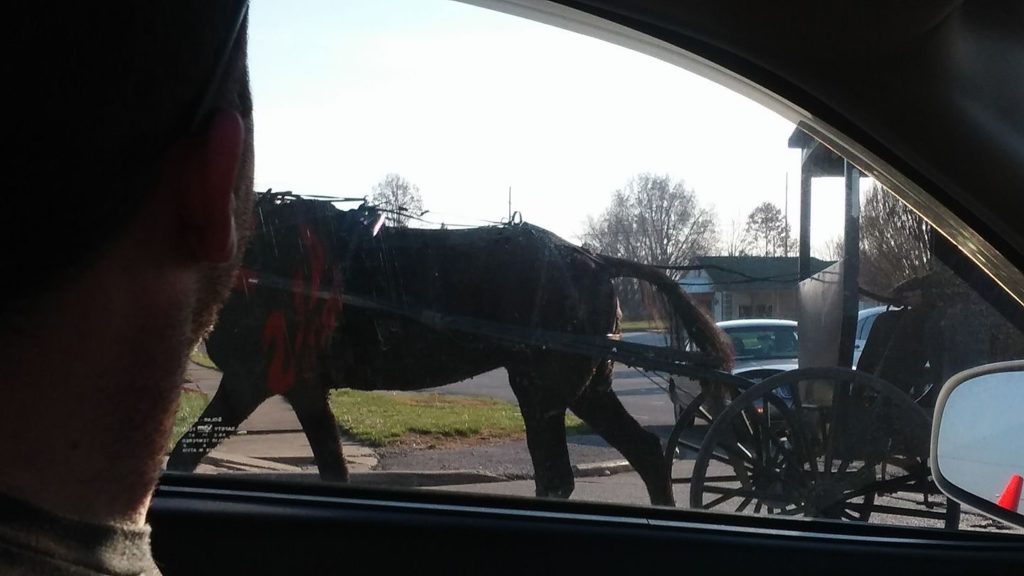 The buggy at a busy intersection in town... 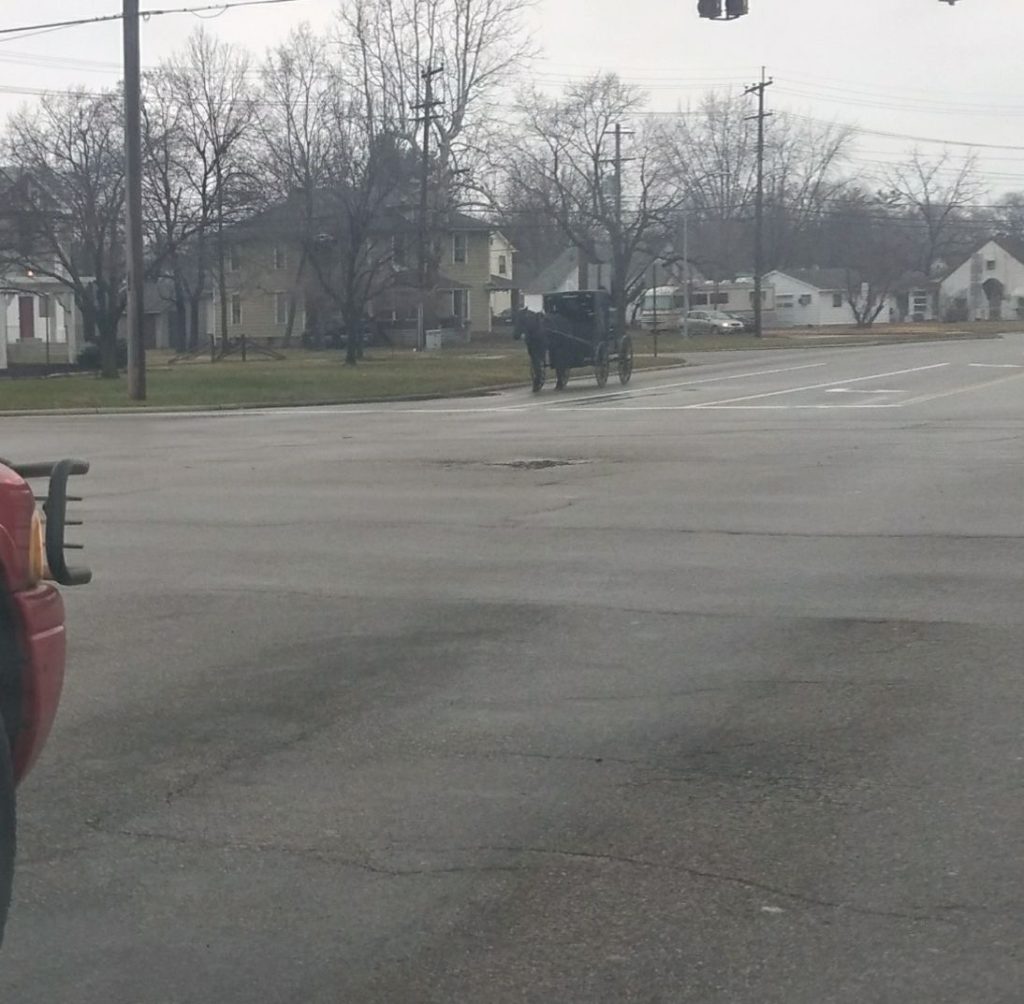 Some of you have asked me to update you on this "mystery buggy."   I don't have a ton of new information to share, but I have some.  I know the street the man lives on but for privacy considerations I'll not say.  But he lives in a kind of semi-rural area north of town and I'll drive by when I get a chance.

Apparently, he is an older gentleman and he is studying Plain ways with the German Baptists.

So, that is what I know. I know where he lives and I heard from the man's brother that he is "studying" with the German Baptists.  There are still a lot of unanswered questions and if I ever see the buggy around town (I feel like the only one who hasn't seen it) I will absolutely talk to the gentleman and get more information. I think his journey sounds like a fascinating one.

This is a new photo of him near a Walgreens in my town. 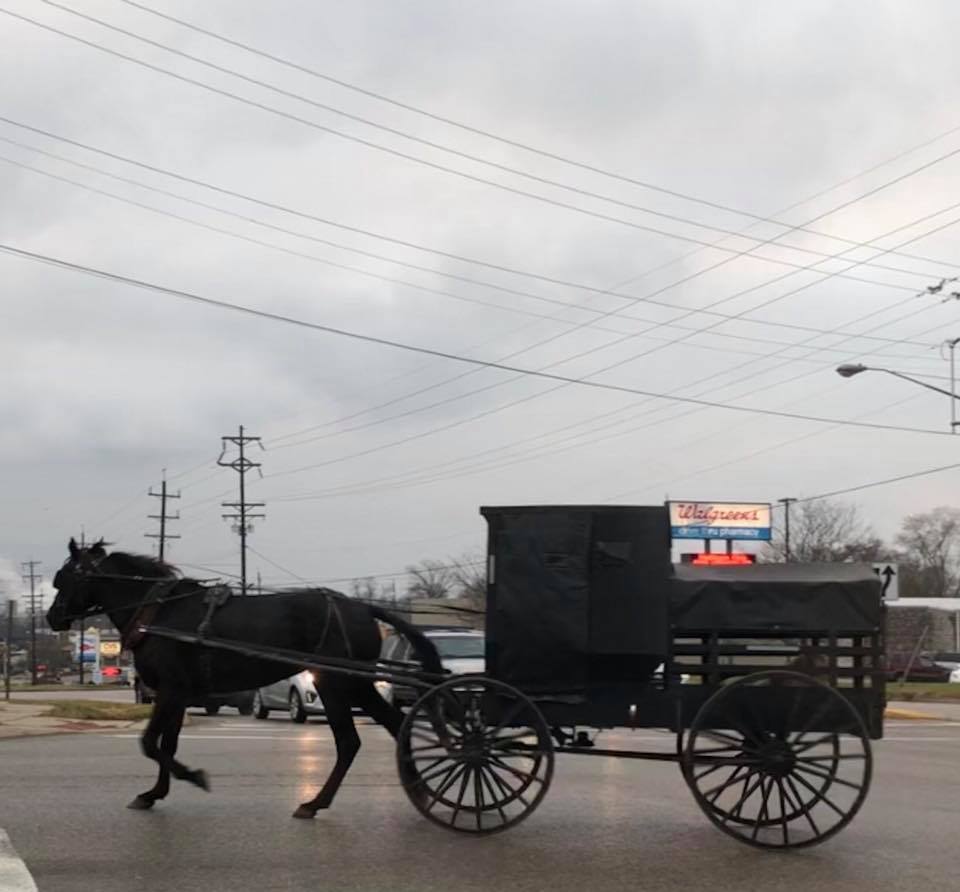