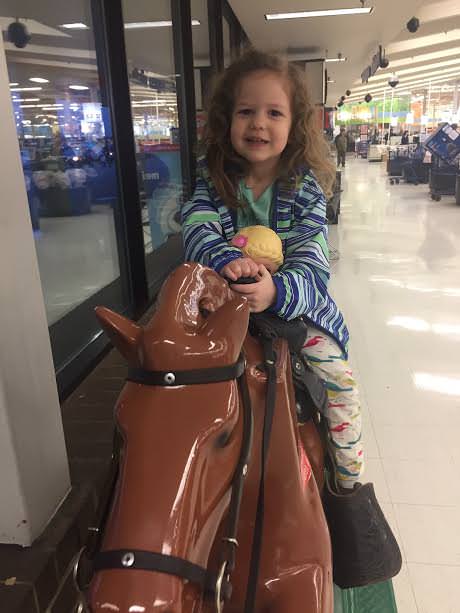 Aster riding Sandy the Meijer horse....er, pony..can't find many other places to use a penny!

In my e-newsletter the other day I wrote about Aster's joy at riding a penny pony at a local grocery store.  The grocery store is called Meijer, pronounced MY-ER.    People in my corner of Ohio find all sorts of ways to butcher the name.  Some people just say MAR.   While others say MAJOR.   And I've heard a time or two: MEE-JER.   I remember one exchange with an uncle years ago:  "We're going to MAR today?"    "You are going tomorrow today?"
I asked, genuinely not understanding.  "To Mar, To Mar."    "Not today, tomorrow?" I asked.  Finally, I figured out he was trying to say that he was going to MY-ER today.

Anyway, Meijer is a midwestern United States grocery chain with sprawling stores that have everything from cookies to motor oil to socks under one roof.  It really is a fine store,, with their corporate headquarters being in Grand Rapids, Michigan (I visited their headquarters, but that is a post for another day and time).   But what pulls me in there more often these days is a little mechanical pony that costs a penny for kids to ride.  Gives them about 2 minutes of back and forth fun.  Compare that to an outdoor outlet mall near me that charges 50 cents for basically the same type of ride.

I always just thought this was some little mechanical pony unique to my store, I didn't realize until yesterday that Aster and I were cavorting with a legend.   Turns out this pony has a name: Sandy.  And it's been around for a long, long, long time.  I realized I may have stumbled on something within minutes after sending out the email yesterday.  Mary from Battle Creek emailed me simply: "The penny horse has a name and her name is Sandy."

Meanwhile, another reader sent me a note: "I got to ride that pony at Meijers when I was a kid. One time (48 years ago), the pony did not stop.  I rode for 20 minutes - until the store manager pulled the plug."

VIDEO DOCUMENTARY OF SANDY THE PONY

Sandy even has a Facebook page, although whoever started it got it wrong, Sandy is a pony.  Sheesh, even Aster corrected me on that the other day before she rode it. I called it a horse and Aster said "It's a pony, dada."

Pony, horse, it's a penny well-spent!