I enjoy cooking and baking with my girls, But when Aster suggested we bake something, I was in the middle of some other more pressing writing work. I told her that I’d be happy to do something later when I’m done with my writing, and she just got upset and said "I can't wait until I'm older and can make these decisions by myself and do these things by myself!"

Then she declared “I bet I could bake something without your help, except for the oven part “. Then she asked if she was allowed to make up a recipe. Not seeing much of a downside, I said “sure, help yourself. I figured it'd keep them occupied and I could get writing done. So as Aster and her sister set about creating something. I continued my work while I heard bowls and pans and stuff rattling around in the kitchen. The only thing I did was get flour from high up in the cabinet and since we didn’t have any eggs I advised them that could use 3 tablespoons of mayonnaise per egg as a substitute. Otherwise, I was not involved.

A little while later they called me into the kitchen and announced that they were ready for their creation to go in the oven. Aster said “we will call these maple brown sugar cookies." I was still skeptical, but one thing I noticed right away was that the cookies that they had made were rolling up nicely, the dough was holding together. So whatever they had used held together nicely. So I took them in the oven at a 350. I was still skeptical, but it seemed to be a pretty light cookie so I set the timer for 15 minutes. That turned out to be about perfect.

After the cookies came out, I sampled them and, they were actually pretty darn good.  I ended up eating a couple of their cookies yesterday. I told Aster we had to log the ingredients before she forgot, so she told me the ingredients that they used. She almost forgot to tell me one, but I spied a can of Reddi-Whip on the counter, and I asked her if she used that? And she nodded. That was their "secret ingredient" I think the fat in the Reddi-whip was what allow the cookies to become cookies. (I even found this article later which explains that using whipped cream in place of butter works well in baking)

So, the taste...well, they were chewy, but good...you got a nice mix of brown sugar but because this was such a small batch (made about 15 cookies), you also could taste the maple. Typically when I add maple to something the flavor just bakes off, it's never enough to notice. But I actually could taste a hint of maple.

I told the girls that I'd never post a recipe that I wouldn't recommend to others, but I actually would not hesitate to fix these. I mean, I think anyone with some baking experience could probably improve upon them just by using more standard techniques and mixing methods. And I'm almost always a fan of eggs over mayo (which, I know, is basically egg), but this recipe worked fine with mayo. This is not a cookie that needs frosting and I think what I like about this cookie is that it delivers a sweet taste without being overpowering, but it's also not a dry what's-the-point-of-having-a-cookie cookie? (some cookie varieties can be so bland that it defeats the purpose)

These ingredient measurements are what Aster told me after the fact, to me, that flour to sugar ratio seems high, but I'd use these ingredients as a starting point and then adjust if you notice something lacking or needing. I'm not going to tell anyone what is below is a perfect recipe, but it is a great framework from which to work from.

This is a picture of the bowl after Aster had slung some brown sugar and mayo together.

Mayo is a good substitute for eggs if you don't have any eggs, which we didn't.

Leaving the kids free reign of the kitchen means a mess.

But I was pleasantly surprised when I came in and saw how nicely the cookies they made were holding together.

It made a nice cookie, some turned out better than others (I think they didn't mix the ingredients quite as consistent as they should have, some cookies rose and spread nicely, others just spread). Anyway, they looked good, they tasted good. If you like brown sugar and maple and don't want an overpoweringly sweet cookie, work with this one!

One cup of flour

Mix ingredients in a large bowl until well combined and you get a firm dough.

Bake for 15 minutes or until edges are golden brown. 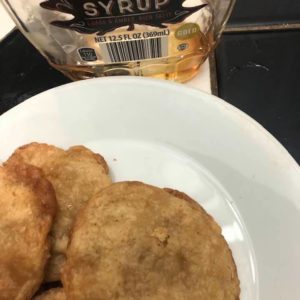 Tried this recipe?Let us know how it was!
« The Amish Cook - Delicious Seasoned Pretzels
Chunky Pennsylvania Dutch Potato Salad »