Well, if you are on my email list (and if you aren't, why aren't you??), you know why this recipe is a natural for me to post! Coca-Cola is one of my biggest vices.  But I wonder what happens to all the nasty ingredients in Coke when it is used for cooking like in this Super Coca-Cola Chicken?

Coca-cola, I am fairly certain, is mainly water so most of it probably just evaporates off and the sweet, sticky, syrupy stuff stays behind to flavor the meat.  But I am not a food chemist, so that is just my best guess.  Anyway, maybe I should quit drinking Coke and just use it in cooking?

Well, if you are on my email list (and if you aren't, why aren't you?), you know why this recipe is a natural for me to post! Coca-cola is one of my biggest vices.   Pepsi chicken doesn't sound very appealing to me but if you are someone who likes that drink instead then, sure, use it instead of Coke in this recipe. Or, better yet, don't use either and use RC.

Oh, and while we are on the topic:  yes, the Amish (I'm generalizing) are huge consumers of soda.  To be honest I've not met too many who were Coke fans, it seems to be Pepsi and especially Mountain Dew that are popular among the Amish.  Not sure why that is. I think it's one of those things where a tradition gains a foothold in a community and then it's just hard to dislodge, so kudos to the Pepsi marketing people. That said, some Amish, especially New Order, like Gloria and family, tend towards healthier diets where soda pop of any kind is a rarity.  But among certain Old Order groups, "pop" has become a mainstay.

This recipe - and the photo above - comes to us from a Mennonite in Canada.  You can bake the chicken in the recipe or baste it and grill it atop a couple full and open Coke cans as shown above!

I kind of wonder how Dr. Pepper or Root Beer would taste in this recipe instead of Coke? Anyway, feel free to use whatever drink you want and use plump, fresh chicken.

The nice mixture of Coke and ketchup before meeting the chicken breasts. This is why it is Super Coca-Cola Chicken!

The instructions below don't call for it, but if you have time, I'd soak the chicken in the Coke overnight in the fridge before baking, I'm thinking that would really enhance the flavor.

Get the chicken good and crisp, even charred on the outside to really make it crispy and seal in that flavor.

And serve with some good summer garden flavor and you'll have a great meal!

Not sure how this would work with clear sodas, like 7-Up. Probably be OK, now where it might be really interesting is with the diet sodas, just not sure how the synthetic sugars and other flavorings would do. Maybe someone can give it a try. 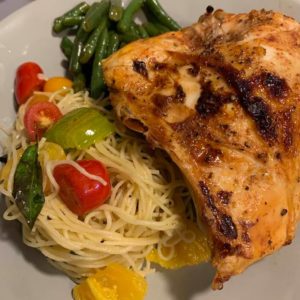 salt and pepper to taste