I wanted to step in this week to give Gloria a “summer break” and, more important, to thank readers for welcoming Gloria into your homes and lives over the past year.  Gloria has been sharing with us now for a full year.  How did 12 months slip by so speedily?  I look forward to more educational and entertaining dispatches from Flat Rock, Illinois in the future, along with Gloria’s delicious recipes.

Meanwhile, as editor, I continue  my behind-the-scenes work, learning, exploring and writing about the Plain people.  In fact, as I write this I’ve got a photocopy of an old article I wrote that appeared in print on August 26, 1990 in The Middletown Journal. I was a cub reporter for the paper and had written a story about the German Baptists a group much like, and often confused with, the Amish.  In the article I quoted a German Baptist farmer who said:

“Fifty years from now, our ways may be different, but our faith, I hope will not be.”

And we are half way there.  That same sentence could be applied to the Amish.  Their faith, to my eyes, is largely unchanged, but their ways have been changing slowly.  Cell phones are fairly common among the Amish and in some settlements buggies are rarely used, replaced instead of tractors and non-Amish taxis .  The arrival of the internet has touched off spirited debate about the future.  Yet, the Amish remain an intriguing touchstone to a simpler time.  I’ve taken my almost 2-year-old daughter, Aster, to visit Amish farms and auctions and I hope I see in her an appreciation of a slower pre-internet era, an era she’ll never know.  (by the way, Gloria’s community chooses not to use cell phones, electricity even in business settings and she told me they would “radically oppose” any introduction of the internet)

It’s common for the public to hear the term “Amish” and think of one monolithic group with the same customs , traditions and theology, but that is not the case.  The Amish are a diverse collection of many churches of varying degrees of insularity.  Yet, they are all Amish, there is not one church which is “more Amish” than another.  So I thought I’d take this opportunity to break-down some of the various groups best I can:

BEACHY AMISH MENNONITES:  This group dresses plainly, but worships in a church building, embraces cars, computers, and other technologies.

NEW ORDER AMISH FELLOWSHIP: “Electric Amish”.  This group uses horse and buggies and dresses plainly but they are different from other  Amish groups by permitting limited electricity in the home, although you still won’t find TV, radios, or computers.  But you will find electric refrigerators and stoves.  The “Electric Amish” live near Guthrie, Kentucky; Walholding, Ohio, and Oakland, Maryland.

THE NEW ORDER AMISH:  A horse and buggy group that has a more progressive approach to some technologies like phones and electricity in businesses,  but the main distinction between this group and the Old Order is that they are more evangelical and mission-minded than the Old Order.  New Order Amish will have Sunday school in the New Order and do mission work such as building homes or schools in other countries.
THE OLD ORDER AMISH:  The largest and best known of the Amish groups, this is a traditional horse and buggy church but there are wide variations in use of technology.  This church tends not to particapte in mission activities and genereally does not embrace Sunday school
THE SWARTENTRUBER AMISH:  There are differences among the Swartzentrubers, with some being more conservative than others.  But most Swartzentrubers resist displaying the orange safety triangle on their buggies and resist motorized appliances of any kind.

THE NEBRASKA AMISH:  The most conservative of all Amish groups, men wear straw hats and no suspenders.  Women do not wear bonnets, instead black kerchiefs.  No motorized equipment at all and buggy tops are white, instead of traditional black.  The Nebraska Amish, despite their name, are found in Pennsylvania in Mifflin County.

Of course, there are exceptions to almost everything above.  One Amish bishop in Kansas called my list “very accurate” but he says his church is “just Amish.”  The vast majority of New and Old Order Amish hold worship services in their homes.  But some Old Order churches in Somerset County, Pennsylvania and in Unity, Maine, for instance, have formal church buildings.  The vast majority of Amish men don’t wear mustaches, but in some Maine communities, mustaches are permitted.  The vast majority of Old Order Mennonite men don’t wear beards.  But in the small Mennonite community of Rich Hill, Missouri, beards are worn.  So, among the Amish and Mennonites the exception really is the rule.

So, once again, thank you all for being such wonderful readers and keeping The Amish Cook going.  You’ll hear from me again from time to time. This column has been part of a personal journey and the journey continues and I’m happy you’re coming with me.  And I thank Gloria and her husband Daniel for being such gifted stewards and caretakers of this column.

I want to share with everyone the most popular Amish Cook recipe in my years as editor, this one came from the late Elizabeth Coblentz, the original Amish Cook, who I met for the first time 24 years ago today  as I write this (July 27).  Looking back, it’s incredible how quickly it all happened in the beginning.  I met Elizabeth  for the first timeon July 27, 1991 and less than a month later the column had found its first home, The Quincy Herald-Whig in Illinois, where it continues to this day.

This recipe has been christened “marriage meatloaf” because an Ohio reader once said her husband liked the recipe so much that it literally saved their marriage. 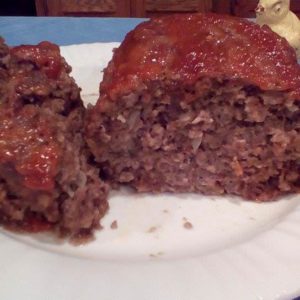