No matter how we try, it's impossible to avoid it altogether. Death is not naturally a pleasant part of life, and we avoid it at all costs. Still, it happens.

This last week we've been face to face with it. After several months of fighting cancer Daniel's Aunt Fannie, who was 63 years old, went to be with the Lord.

All of us, our six children, Daniel and myself, headed for Danville, Ohio, to grieve with the family and see our dear aunt once more. During Daniel's growing up years, Fannie and her husband raised their nine children right next door.

Now, her life is but a memory. Can it be true? I'm comforted to know that each seed of love and care that she scattered to the many people that knew her would remain and grow in all of our hearts.

Before our seven-hour trip, Daniel and I pondered together over the absolute reality of death. We talked of the importance of our children being faced with it at a young age, equipping their hearts with the fact that life on earth is only a stage of preparing for heaven and telling others the good news about Jesus.

The children had been sick that week, the chances of going by Friday forenoon looked slim. We prayed as to what we should do. Daniel wasn't sold on the thought of going without his wife and children. Somehow, both of us felt like all going as a family would still be the thing to do; this flu bug hung on stubbornly. Departure day was creeping up. Early Friday morning was rough still. We knew that if God wanted us to go, he'd pave the way. When I got up that morning, I felt refreshed despite the extremely minimal amount of sleep I had gotten. Only moments before I had awakened, I dreamed that a messenger from God came with a poem for me. It was exactly what I needed to have the courage to go on in my dream. In my heart, I knew that there would be no chance of staying home even though the odds of making the trip had escalated during the night as several of the children slept fitfully.

Daniel and I discussed our options at the breakfast table and agreed that God would provide a way for the children to be good enough for the trip.

With hoots and hollers from around the table, the children sprang into action, following Mom's instructions to help get the house presentable and clothes packed. An hour and a half later, our driver with a 15 passenger van pulled in the driveway with Daniel's brother John, his wife, and daughter. Daniel took the car seats out and loaded them in the van while I stayed in the house with the children before taking them through the windy weather.

Moments later, we were all strapped in as the tires crunched over the gravel road. We were off. It wasn't long until the typical question popped up, "Mom, when will we drive under the Ohio arch?"
In our family, it's always a race to see who can first spy the arch on the Indiana/ Ohio border on interstate 70. This time it was Daddy, on the back seat, who won. "There it is!" he exclaimed.
As we drove under it, I explained to the children how the sign used to say, "Welcome to Ohio. So much to discover," when Daniel and I were dating.

"That's just how it was; there was so much for me to discover as I got to know Daddy!"
They smiled at the thought of me getting to know him and the rich dimension it added to my life.

Several hours later, we pulled into Grandpa's driveway. We quickly unloaded the van before getting dressed to go to the viewing, hosted at the Amish church's community building next door.

Upon our arrival, long rows of buggies stood parked to the side of the building, and vehicles (primarily vans used for driving Amish folks) were lined up upfront.
Inside were several hundred people, many of which we knew. We all shared the common ache. We hurt to see Fannie go, deeply hurting the family, including two of her daughters who are expecting their first baby soon. We shook hands; we cried; we hugged; we agreed that indeed God's ways are higher than our own. But most of all, we knew that all of us, who live for the Lord with our whole hearts, will one day see Jesus where Fannie was already experiencing perfect splendor.
Throughout the evening, people were constantly coming and going. By 8:00, Daniel helped me walk the children back to his parent's house, and I got them ready for bed and tucked them in while Daniel went back to spend more time with family.
The following day was the funeral, which accommodated 900 people. There were people everywhere! I don't recall ever before being to a gathering quite that size.
The afternoon of the funeral, we started our homeward journey. By 9:00, we were home safe and sound. There's nothing quite like home sweet home!
Okay, wrapping up I'll leave you with Amish potato ranch casserole which was served as part of the noon meal on the day of the funeral.

This Amish Ranch Potato Casserole is a really flavorful casserole and has a little bit of everything in it for everyone: bacon, potatoes, hamburger, ranch dressing, I mean, it really does have it all!

Peel and shred the potatoes. I think if you were in a pinch and didn't have a shredder, you could dice them and the Amish Ranch Potato casserole would turn out fine, the texture would just be a little different, a little chunkier, but if you love potatoes, no big deal.

Fry and then crumble the bacon.

The whole Amish Ranch Potato recipe is then put into a big dish and baked.

The bacon will crisp up even more as the casserole bakes, and that is fine. It's all delicious! If I could do it over again, I might add some more ranch. Also, Gloria notes that she makes her own cream of mushroom soup and her own ranch for this recipe. All of that would probably make it that much better, but for most home cooks, you can just buy those foods to add in to your Amish Ranch Potato Casserole. 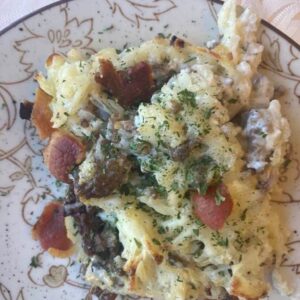 Tried this recipe?Let us know how it was!
« Easy Amish Baked Chicken and Rice
Mennonite Pan-Fried Chicken »