Regular readers know that I’ve been editor of this column for 25 years this July. I could fill a page about how naïve I was when I began this venture at age 18 or with tales of how fast time seems to have evaporated since those days.  But I won’t do that this time. I just want to thank readers and newspapers for coming back week after week for a glimpse of a life that too often eludes us. For all their human flaws, the richness of the Amish faith and closeness of family bonds are still something that seem increasingly missing from today’s society.  That void has only grown in the past 25 years.

A couple of Amish people are on my mind today, people that, in their own small ways, helped shape the Amish we know today.  Perhaps as I approach my mid-40s and am a father the losses sting a little deeper and make me ponder my own contributions more.

People come and go and that’s one of the enduring life lessons, I think, as one gets older: friends vanish and reappear like ghostly apparitions but family is enduring and endearing.  There are two Amish men I’d like to remember this week who’s families miss them greatly: 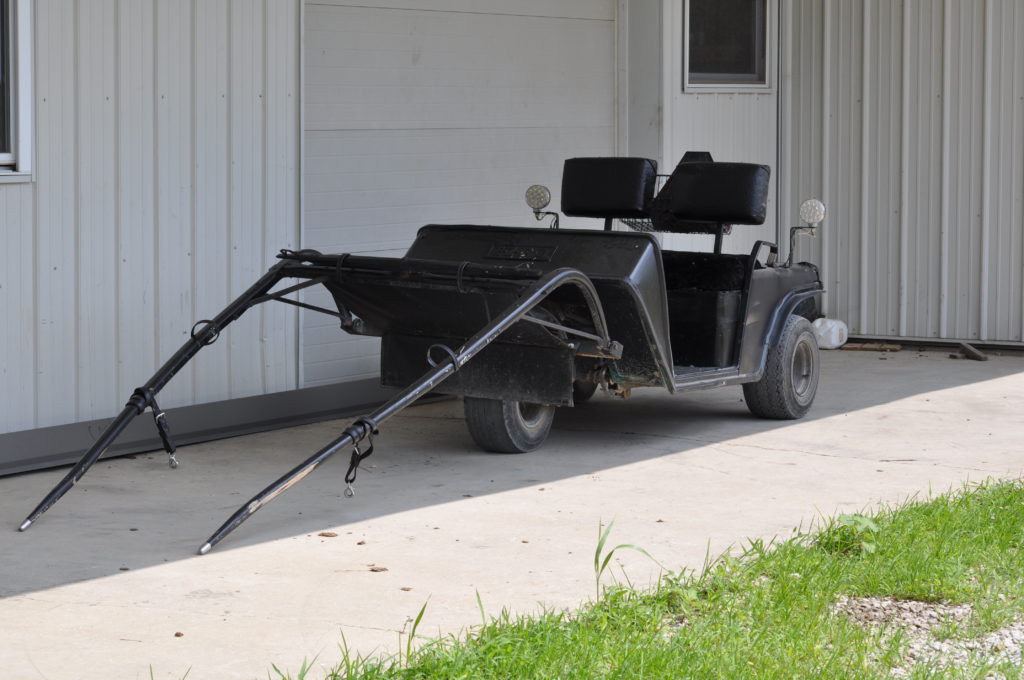 AMMON C. RABER: Gloria’s grandfather, Ammon Raber, 80, passed away last week.  There was a visitation and funeral to plan and goodbyes to say, so I offered Gloria a week off to regroup and she gratefully accepted.  I’ve met many Amish over the years, but it was a single quirky leap of imagination that I’ll always remember Ammon Raber for. Ammon Raber’s creation was a stroke of Amish ingenuity, a talisman to the richness and resourcefulness coursing through their culture.  When I first saw it, I had to look several times.  But, no, I wasn’t seeing things.  Shimmering in the summer sun in his driveway was a golf cart that had been gutted and modified and looked like no Amish buggy I had ever seen before.

It was actually a golf cart that he bought and then modified to become a “buggy.”  He gutted the insides of all electronic components, painted it black, and added buggy shafts.  The results was a souped up golf cart/buggy hybrid.  Ammon explained the advantage of the golf cart was that he a he and his wife could avoid a tough climb up into a buggy, something that can be tough for senior citizen Amish.  It can be quite a climb even for the young and fit.   The “senior citizen” friendly buggy became so popular that he had several orders from others for more like it.

This week also marked the passing of another Amish man who certainly made a mark in his 84 years. I was saddened to hear of the passing of Monroe Hoschstetler, 84, last week in Belle Center, Ohio.

Monroe was a big part of one of the most interesting experiments in Amish history: an attempt to start a community in Honduras during the 1970s.  The effort is recounted in rich, riveting detail by Amish author Joseph Stoll and his family in the book “Sunshine and Shadow: Our 7 Years in Honduras.”

A group of Old Order Amish families decided in the late 60s that they wanted to spread their way of life to areas that were less fortunate.  This was a time when Amish society (like the rest of society) was going through some wrenching changes.  After living largely in agrarian isolation in the United States, the national economy was lurching and changing and bringing the Amish along for the ride. Farming, for a variety of reasons detailed in the book, was becoming less and less viable.  So some Amish hatched a plan to start a settlement in a place where their farming would be appreciated and contribute to society.  They chose Honduras.

Monroe Hoschtetler was a minister in the Honduras community. Starting a settlement from scratch so far from home entailed numerous challenges and, in the end, competing visions of the settlement’s future tore it apart.  Today, little trace of it remains.  I had the chance to meet Monroe Hoschtetler once when he was visiting and preaching in Montana.  He was a wise, elder statesman with a flowing white beard who captivated me with tales of Honduras.  I’ve met others who were a part of that experiment.   It took tremendous courage and helped infuse Hispanic influence into Amish cooking.  Dorcas Martin, an Amish woman in Aylmer, Ontario, remembers her parents being part of the Honduras community and she shared a popular recipe from there with us.  She said they’d add a little lettuce or chili sauce to the folded up tortilla.

Combine the corn flour and salt in a small mixing bowl.  Add 1 cup of water, a little at a time, as you continue to mix the ingredients. Knead the dough, adding more water if necessary to keep the dough moist and holding its shape. Let the rough rest for 25 – 30 minutes.

Diivide the dough into twelve balls, each the size of a medium egg.  Press and pat the balls into a tortilla shape or use a tortilla press Place each tortilla on a ungreased hot griddle and cook untio golden brown. When the bubbling stops turn the tortilla and brown the other side. Remove from the griddle while the tortilla is pliable.  Stack the finish tortillas ot keep them moist and warm. Use immediately or allow to cool.