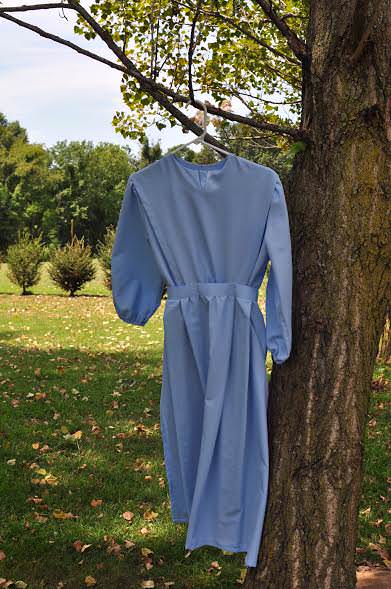 This is a dress Gloria wore at her friend Maria's wedding last year, she wore a similar dress this past week at a wedding in Pennsylvania but it was a deep lavender color instead.

Would you like to take a peek into our world today?

It’s the day before a 3-day trip to Pennsylvania where we plan, Lord willing, to attend a double wedding where two of my cousins plan to get married the same day.

Packing for a trip is something that I always look forward to, although it does take some effort.  Daughter Julia has been waiting for days for the time to arrive when she can pack her clothes, dolls, toys,and such.  And, now, the day is here at last.

The alarm roused me out of a deep sleep at 5:30 this morning. My husband Daniel told me that he’s getting up but if I want I can sleep an additional 10 minutes.  Nice, sure, I won’t turn that down.

Fifteen minutes later we were sitting side by side on the couch having devotions together.  Next was breakfast time. Daniel made several pieces of toast on the griddle while I fried a few eggs. By the way we both eat our eggs over medium, even though I used to detest them. Somehow 8 years ago I discovered my boyfriend (Daniel) likes these eggs. I soon learned to like them as well. How does all that work anyway? No one else could have convinced me they are good.

As we were finishing breakfast, Daniel mentioned that he’ll need to leave for work in five minutes. Quickly, I jumped up and packed his lunch bucket as swiftly as possible. After spreading mayo and barbecue sauce onto a slice of homemade bread I arranged several slices of bologna on top and slid it into a container. Some apricot yogurt and a bar completed his simple lunch.

Soon he was on his way. Returning to the house I debated as to what should be tackled first. I spotted Julia and my coverings (kapps) that need to be washed. After giving them a good scrubbing and rinsing them I tied the covering strings to a hanger, then hung them out to dry. As I stepped outside I couldn’t help but marvel at the freshness of the morning, my favorite part of the day. I quietly talked to God and trusted my day into His hands.

Returning inside I decided to pack Daniel and my clothing while the children slept. I had so much fun: which color should we wear and when? I like matching with Daniel but, of course, we don’t always have  enough of the same colors to always do so.

I had most of our packing done by the time the children woke up. After giving them breakfast I read the story of baby Jesus to them.  Next, I helped Julia pack her clothes. Even though I try to have everything organized ahead of time it seems there’s always a button to sew on somewhere, a coat that needs to be washed, or Sunday shoes to be blacked. I also had a dress to hem for myself, which I plan to wear a the wedding.

Daniel and I were asked to be servers at the wedding with me needing to wear deep lavender. I didn’t have any dress that color so I had to borrow one from a friend of mine. Since I am a “shortie” I  had to hem it up a few inches in order to be able to wear it.

As I sewed, Austin was progressively becoming more restless. I dropped my work and rocked him as I looked at one of his favorite books with him and then fixed  some juice for him. Still he seemed fussier than usual. An  my patience was being tested as my list of things to do stood still.  At that moment I just didn’t feel ike the ideal mother that always knows just what to do. I prayed, telling God that I really need his wisdom and help. Soon after that things being flowing more smoothly. I decided that maybe an early lunch would be a blessing so that’s what we did. I made one of my standby soups consisting of butternut squash puree with green beans and meat chunks.

Daniel came home from work at 3 o’clock and took the children outside with him giving me a chance to get ahead with my list of wrapping up the packing and doing some basic cleaning.  Soon it was time for supper, baths, and haircuts for Austin and Daniel. Haircuts have never been on Austin’s list of favorites, but I enjoy giving them.

Last on my list was making some seasoned crackers to snack on during the 550 mile trip t Pennsylvania tomorrow. Of all things Julia fell asleep on the couch before I had all the “musts” crossed off my list. I decided the crackers would have to be eaten plain. Perhaps you will now be the ones to make this salty, tasty treat instead of me.