Winter gave us some great late-season fun.    Overall, our winter was certainly much milder than a year ago. Daughter Julia had been waiting all winter for a bunch of snow to go sledding and build a snowman, but she had to wait until the end of February.   One night, just when we thought maybe winter was going to pass without a significant snow, we got a nice blanket of snow. Early that morning my husband Daniel had gotten up to put several pieces of wood in the stove when I heard him exclaim “What is going on?”

Startled, I asked “What’s up?”

“Everything out there is covered with snow!” he responded.

Relieved, I settled down once more in our warm, cozy bed.  Nothing was wrong at all.  Daniel just hadn’t realizeed that there was any snow in the forecast and was quite surprised by the blanket of snow that caught his attention when he glanced out the window.

At the crack of dawn Daniel slipped outside and fed the birds. In no time, our feathered friends came flocking in. I served Daniel a mug of latte as he sat at the kitchen table enjoying the birds. He counted 45 cardinals on and around feeder with an additional group on the fence beyond. Gold finc hes, juncos, chickadees, and woodpeckers also enjoy Daniel’s liberal supply of bird seed. Last year Daniel estimated 95 gold finches feasting on one of the feeders.

You should try making this homemade bird food.  You’ll enjoy reconnecting with nature and the simple joy of seeing birds out your window.  And the birds will love it and enjoy feasting on it even after the snow has melted and it is warming up.

With all the snow we’ve had the last two weeks it makes them flock in a lot more.  A week ago we ended up with close to a foot of late season snow which is more than usual for our area. 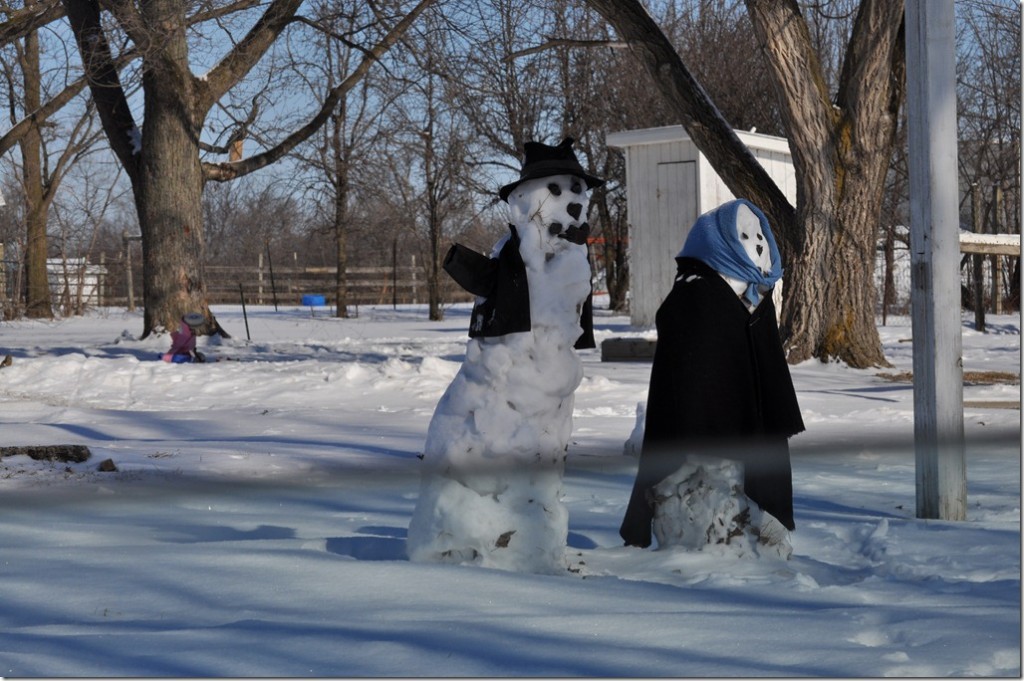 These aren't Julia's snow friends, but they are some Amish snowmen melting under a late winter sun around the same time last year (Dave Shaner photo)

Julia was all excited when Daniel told her that he’d take her sledding.  After bundling her up in her thick winter coat, tan muffler, and pink gloves, I wrapped her in a cozy blanket and she was off with Daddy.

From living room window where I was holding Austin I watched as they merrily went down the hill and back again. After a bit, Julia was ready to come back inside and warm up.

On Saturday forenoon Daniel promised Julia that he’ll help her make a snowman in the afternoon. Once more I had fun watching from the window. I was both fascinated and impressed as I noticed them building not only one snowman but a snow family! After the snowmen were made, Julia was thrilled to show them to me.

It was so cute, the little snow family as perched in a row beside the road, each representing one of us. The stick arms topped it off, the 2 smaller ones held hands and the 2 larger ones showing Daniel and I held hands as well.

Here is the homemade bird suet that will be sure to attract a crowd of feathered friends any time of year!  You can use your imagination when using this recipe, maybe adding some cracked egg shells, for instance, to replace some of the dry ingredients.

Melt lard and peanut butter and mix with remaining ingredients.