Amish people are allowed to go just about anywhere, so it's not like it's impermissible for them to be someplace fun or unusual. But sometimes it's just jarring or unexpected for me to see a Plain person in a particular place. I 'll be somewhere far, far, far from Amish country and then, presto, a Plain person will appear and I'll find myself wondering where they are from, why they are there, etc.

I've seen Amish anywhere over the years: hospitals, bus stations, train stations, museums, etc.  So the image of Amish people somehow being tucked away in rural isolation just doesn't hold up.  Here are five places  - in reverse order - that come to mind where I've been surprised to run into some Plain friends. 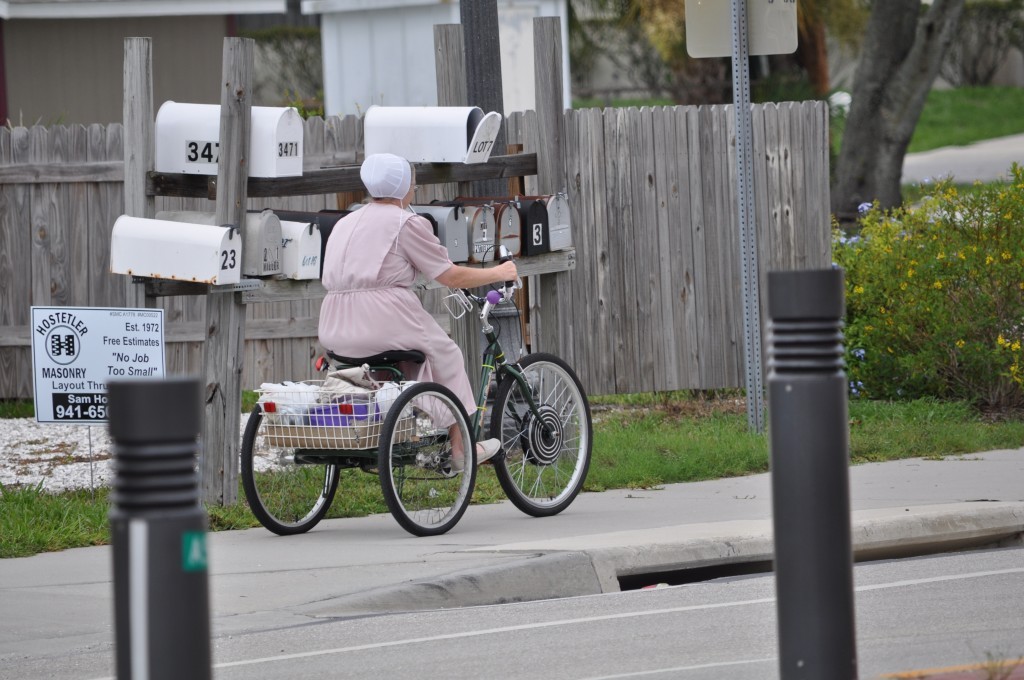 This is an Amish woman pedaling through Pinecraft.While some people may be surprised to see Amish people in Florida, this did not make my Top Five.

FIVE:  Shelbyville, Indiana public library.  I was giving a talk about the Amish at this library several years back and I was surprised to see an Amish man and his wife show up to hear my talk.  Having an Amish person in the audience when I'm giving a talk about the Amish rattled me.  I'm still not sure how he heard about my talk but he came up to me after my presentation and said he really enjoyed.  I'm glad, because I was sweating it through the whole thing, hoping I was getting everything accurate!:)

FOUR:  North Dakota....I was in Bismarck to give a talk and I picked up a copy of the Bismarck Tribune (this was in February 2004) and there was a front page photo of David Kline giving a speech.  He's a very talented Amish author and writer and a good speaker.  I was surprised to see him in North Dakota, or at least a picture of him!

THREE: Kentucky Horse Park.  Now, this shouldn't have been a surprise...because the Amish and horses are synonymous but it was a huge group and I just wasn't expecting to see so many Amish people there.

TWO:  Kansas City Airport's food court.  Very unusual for Amish people to fly, but not unheard of.  Amish people who live in St. Ignatius, Montana often fly to visit family in Ohio and that's probably what we were seeing.

ONE:  Hilton Head Island, South Carolina.  Hilton Head is not easy to get to, it's a popular tourist place, but it is off the beaten path, far from any Amish areas.  And I was on Monarch beach in Sea Pines at the very tip of foot-shaped Hilton Head Island about as far away as one could get from an interstate and what you know? Two young Amish women strolled right past me on their beach, wearing head-coverings and hold their crocs as they walked barefoot through the sand.   That island probably gets one or two Amish visitors a year and I just happened to cross paths with them.