Today is International Agriculture Day, so what better day than today to share a little bit of Just Plain Rosanna with you.

For newcomers, Rosanna Bauman is one of our weekly columnists.  She is Old Order German Baptist Brethren, not Amish.  The Brethren theological roots are different than the Amish and, while considered "Plain", they do embrace technology more than the Amish and that includes, to a degree, photography.  The Brethren view of photography is less about capturing the "graven image" which is the Amish concern and more about just calling attention to one's self.  I talked to Rosanna about posting this video (in fact, it was her that suggested that I do) just to make sure she wouldn't catch flak from anyone in her church.  And Rosanna replied that this speech was given in a "public space", she wouldn't want to be videoed just walking on her farm, but she said in a public setting like this, she is comfortable being filmed.

So click here to watch Rosanna give a talk.  There are two videos on this page, the video of Rosanna is the to the right.  I think very few of you are going to watch the whole 40 minute talk and that's fine, but at least this gives you a chance to sort of "get to know" Rosanna even more.  At about minute 22 in the video she starts talking about her Europe trip.  I've met Rosanna several times in person now and she is just a fun, intelligent presence to be around. 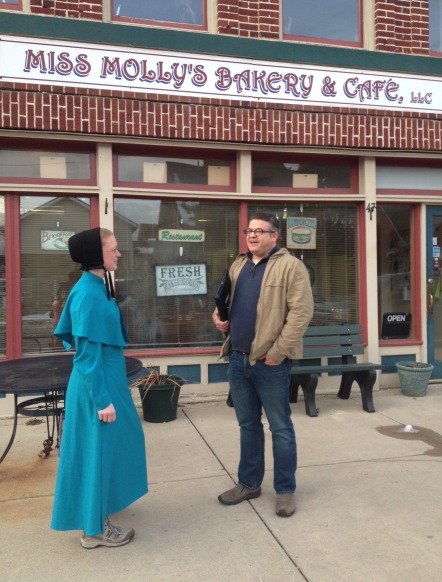 I've met Rosanna a couple of times. This is her and me outside of Miss Molly's cafe in Farmersville, Ohio in 2013

Rosanna was the keynote speaker at the Kansas Farmers Union conference last year.  She really is an amazing young woman, very involved,  very passionate about sustainable farming, and just very much her own person.   Yet she is still very devoted to her church and faith.

Rosanna's talk to the Kansas Farmer's Union is about small-scale farming and sustainability, I think she did a great job!