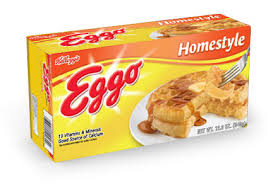 CAPTION:  you can use homemade waffles or frozen waffles in this neat casserole recipe!

Weekend breakfasts are a little slower paced in Amish households, especially on a non-church Sunday.  Kids aren't rushing off to school and often the husbands aren't heading off to the factory.  There's just a more relaxing morning mood on these weekend days.  And that means some delicious, different breakfasts.

Cookies, casseroles and baked breads might be on the weekend morning menu. As might a more expansive selection of sausage and bacon.  Perhaps some cinnamon rolls.  And maybe waffles or pancakes.

A few years ago French toast casserole was the fad breakfast in Amish households. But what about "waffle casserole"?  This is a recipe I've seen making the rounds of late and it does seem delicious.  Give it a try this weekend and let us know how it turns out!