I love maps.  I sometimes ban my parents from using a GPS on trips with them because what fun is that?  There's something satisfying (for me, anyway) about looking at a map and planning one's route, learning the town names, reading and remembering the topography.  I actually sit and pore over my Rand McNally road atlas just for fun.  I think I inherited that trait from my grandpa.  My brother didn’t get it.  He can’t find his way out of a paper sack.  There’s an old Peanuts comic strip where Snoopy says something like “I love maps. I just don’t know what all the names, lines, and colors mean.”    That would be my brother, Geoff.  But, me, I can sit and read an atlas for fun.    And I love vanishing enclaves of ethnicity in America, not just the Amish.  For all the immigration debates roiling in Washington (let the politicians do their thing, this isn't a political post) I love the cultural quilt that makes up America. There are the Cajun French hanging on in Louisiana, a fascinating culture.  There are the direct descendants of Elizabethean English speakers still hunkered down in the hills of eastern Kentucky. And in northern Maine there are counties that are majority French, a vestige of the area's Franco past.   Being of Italian heritage, I find “Little Italies” fascinating.  There are Italian enclaves in Cleveland, Boston and other big cities where everyone looks like my Grandmother or Uncle Pat.  My own hometown of Middletown used to have a patchwork of ethnic enclaves until assimilation and economics took their toll.  The last Italian-owned grocery's lights flickered out less than a decade ago.  And, of course, the Amish are an ethnic enclave all their own in many ways, especially around Berne and Geneva, Indiana named after the the cities of their Swiss lineage. 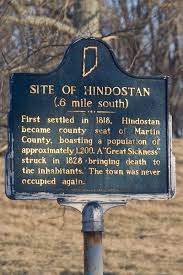 Sometimes I’ll look at a map and see a name that sparks my interest:  Hindustan in rural Indiana?  What is that all about? I passed Hindustan last week.  Interestingly the historical plaque makes no mention of the obvious: where the heck did the town get its name?  Was there once an Indian presence here? (the picture says HINDOSTAN, but the name was changed in spelling to Hindustan, so perhaps it has nothing to do with India, but it still an intriguing name)

When I was in high school I remember (I know, such a wild and crazy teenager) poring over maps of the Midwest and noticing a lot of French-sounding town names in southern Illinois:  Prairie du Rocher, and Renault  in Illinois and River aux Vases and St. Genevieve across the river in Missouri. I took French for four years in high school and River aux Vases literally translates as "scummy river" or "river of scum."  I was intrigued.   Not long after I “discovered” those town names I was working my Fool-the-Guesser both at Americana Amusement Park.  This would have been 1988 or 1989. I always asked people where they were from before insulting them by guessing their age and weight and most of the time it was somewhere close by: a Cincinnati suburb or perhaps a place in rural Mercer County, Ohio (home to a culturally distinct population of rural German Catholics).  But imagine my surprise when I asked one of my customers where he was from and he replied “Prairie du Rocher”, Illinois.   What were the odds? He handed me a copy of his business card and it turns he owned a car lot there and was in my area visiting family.  I asked him about the area’s French names and he proceeded to tell me about a Catholic church in Prairie du Rocher (translated as "Prairie of Rocks") that still delivered masses in French and had a chalice in its possession from the reign of Louis the XIV in France (way back in the 1700s).  He also told me about efforts to record the fading French language around a town called Old Mines in Missouri where some elderly hold-outs still spoke the Mother tongue. I have seen a couple of recent articles on the newswires about these efforts to capture the last bits of fading French dialect known locally as "paw paw French".  Click here to read an Associated Press article about it and another lengthy article with a sound clip of the language here.