Bacon is a favorite of many as the pork makes its way into sweets as well as savories.  This Amish cook in Oklahoma came up with a way to have a hearty casserole and her bacon too! Instead of a bread-crust type bottom she uses, bacon!   So for bacon lovers, give this Amish classic a try!

By the way, most Amish do cure their own bacon: whether it is salt-cured, sugar-cured, or smoked, each family has their own special bacon recipe, usually. Bacon is then enjoyed on sandwiches, crumbled into soups and salads, stirred into casseroles, or just cooked and enjoyed with scrambled eggs. The uses of bacon on Amish farms and in kitchens is almost unending. If you ever have a chance to stay at an Amish home, you wont' need an alarm clock. Because chances are the amazing aroma of fresh bacon frying will fill your nostrils and wake you up in the morning.

By the way, while on the topic of Oklahoma, the Sooner State has a very small Amish presence. There are a couple of communities in the northeast part of the state, but that is about it. The Amish of Oklahoma are a bit more progressive than some, for instance, they use tractors for farming which most Amish do not.

Most Amish cooks don’t go to the store and buy a package of Smithfield bacon. Not that there’s anything wrong with Smithfield bacon. But most Amish cooks have their own home-sourced bacon. If they don’t raise their own hogs, they can get bacon, ham, and other pork products from Amish farmers in the community. There’s really no comparing fresh home-sourced bacon with store-bought. The bacon is thicker, and more flavorful.

You'll want to layer cooked bacon on the bottom and then spoon the cooked hamburger on top. When you serve it, you'll spoon it out and serve bacon-side up. Yes, this recipe does have cream of mushroom soup in it, very typical of Amish dishes of the post World War II era.

Fresh potatoes, homegrown carrots, and onions cover the meat in a layer of veggies, which balances nicely. And, then, yes, the dump of cream of mushroom soup.

This casserole pairs well with two carnivore staples: Amish, bacon, and ground beef. The pairing works pretty well, if you think about it this really isn’t much more than a deconstructed bacon double cheeseburger. Well, there’s no cheese in this. But you get what I’m saying

Cut and serve, and you'll have the bacon on the bottom, a layer of burger, veggies, and a mushroom mix on topic that is golden and crisp.

I remember early in my career, when I was trying to sell the Amish column to newspapers, the Amish cook wrote a column about butchering day and how homemade bacon was made. The Amish Cook, always had trouble breaking into big-city newspapers, but the editor of the Flint Journal in Flint Michigan wanted to run the bacon column. But only the bacon column. I agreed and so for one marvelous week, the column ran in Flint. And at the time, Flint, Michigan's newspaper was a big deal. Now, like so many other papers, it is a shell of its former self.

Can veggie bacon be used in this recipe instead of real bacon?

Yes, just swap out the real bacon with veggie bacon and the hamburger for veggie crumbles for a full veggie version. Only difference is don't cook those ahead of time, they'll heat thoroughly in the oven.

In addition to big slabs of bacon, the Amish of Oklahoma are known for big beefy meals, barbecue sauce, and super homemade bread. 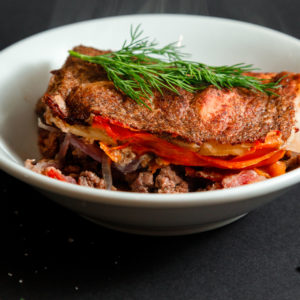 Tried this recipe?Let us know how it was!
« Cheesy and Creamy Amish Chicken and Rice
Old-Fashioned Sausage Pie »