When I was in high school and I was carefree and calorie-free, my brother and I used to love to drive out to a little ice cream joint near us and order butterscotch milkshakes. They were amazing.  SIGH, I think about those shakes everytime I drive by that place which is now an auto garage.

Among Amish cooks, butterscotch is a mainstay because in a kitchen that isn’t loaded with the rich confections that many others have, you can do a lot with butter and brown sugar, including butterscotch. This saucy goodness can then be incorporated into breads, rolls, puddings, muffins, and more.

SIGH, I love NPR, but their food people can be so snooty.  Anyway, here is what they say about butterscotch:

To that deliciously deepened sugar and dairy you add a few more elements. There's the perfume of vanilla and then a savory dose of salt, which give a depth to the buttery sweetness. Altogether, it creates a lovely balance. Plus there seems to be, at least for me, a nostalgia factor. Butterscotch tastes like comfort, like childhood.

The secret to a great butterscotch sauce seems to be in using heavy cream.  That helps give it the consistency and flavor you are seeking.

Most recipes for butterscotch pudding call for dark brown sugar. I thought the pudding came out too dark using the dark brown; you get a creamier color with light. But I’ll leave which one you use up to you. In the recipe below, the Amish cook that the recipe came from, she said that boiling the sugar and butter together in a cast-iron skillet gives the best results, but you don't have to, mine turned out wonderfully in a regular pot.

Let's look at some photos:

Your sugar and butter mixture will look crumbly and coarse.

Mix the vanilla, flour, milk, salt, and egg like above.

The process of making butterscotch isn't the prettiest, but when you are all done, you'll get a beautiful, delicious pudding!

So this is our Amish "butterscotch hall of fame", check out these recipes! 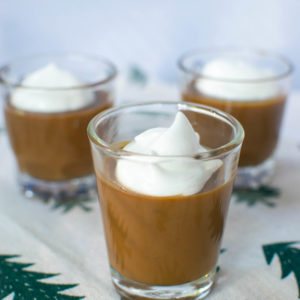 Tried this recipe?Let us know how it was!
« Grandma's Homemade Nut Bread
Amish Ham Loaf »