Today we will be rewinding 10 years and reliving the events of a rather colorful day when I was 18 years old. As I read this entry from my personal diary I couldn't help but laugh at some of the memories. Interestingly enough, this particular day a young man from Ohio was in the community that day helping prepare for a wedding and secretly hoping Gloria (then Raber) would show up at the same place! Unfortunately, I had been there the day before and now had other things to look after. Here we go:

Since Mom planned to go help cook for the wedding the following day I knew I would have some added responsibility, which I looked forward to. 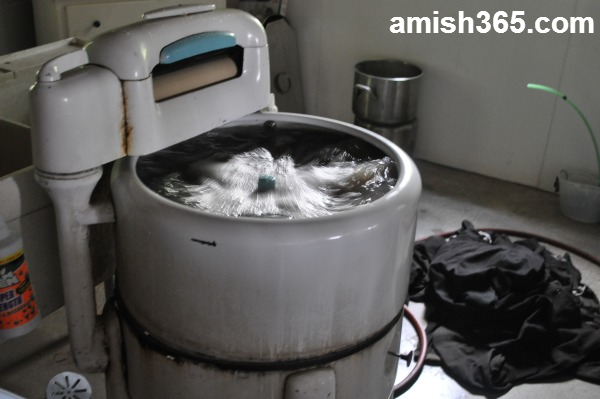 A little before 6:00 I started laundry in our wringer washer. It so happened that there were extra clothes to be washed including some super stinky stuff that the boys had worn for turkey load-out on our turkey farm.

Mom left at 7:30, after making a list of things for the younger children to do while she was gone.

A few hours later the laundry was all flapping away on the wash line. Next, I headed to the shop to give Dad a message, then helped our neighbor girls hitch up our pony which they planned to use to go to the Weavers where the wedding was to be the following day.

After returning to the house I baked the chocolate chip cookies I had mixed up the day before. In the meanwhile I stirred up a batch of Graham cracker cookies and made some chocolate syrup that was to be used for chocolate milk to serve for the five guys helping with a cementing job in the shop.

On my way back from the shop where I had served fresh cookies and chocolate milk I was trying to figure out why the milk tasted so funny. That's when the thought struck me, "I forgot to put cocoa in the chocolate syrup!" Oh no. I quickly whisked cocoa into the remaining syrup, mixed up some real chocolate milk and headed for the shop once more.

By this time my adrenaline was really kicking in. My moves had to count! Besides getting ready to go to the wedding the next day we had overnight guests scheduled to come to our house that night. (Unknown to me these guests would be someday be my aunt and uncle by marriage.)

Returning to the house I baked the rest of the cookies then ironed a few coverings we planned to wear at the wedding.

At 11:00 I took a sandwich out for Dad who was also working on the cement job. That's when Dad discovered that four of the guys didn't bring their own lunches.

"Call up to the store and order four sandwiches," he instructed.

"Wow, that'll be easy enough," I told myself.

When they didn't answer it dawned on me that they are closed on Wed. "Okay, I'll just make sandwiches," I decided grabbing bread, homemade bologna, and kielbasa from the freezer.  "Homemade ice cream and chocolate cake would be perfect to go with it," I decided.

"Jeriah can help you with the ice cream," Dad said.

Entering the house the thought dawned on me that Jeriah had gone to the neighbors' lake.

"What shall I do now?" I wondered, I knew I was running out of time.

"Pray," I knew the answer was from God.

I told God about my predicament and went ahead and stirred up the ice cream then went to the shop and fetched the ice. There in the shop stood Jeriah! Praise God, my younger brother was there just in time to chop the ice and freeze the ice cream!

By the time I came back to the house my nine-year-old sister,Mary Grace, was almost done whisking up the chocolate cake- that is, except the eggs. "Oh no," I groaned, we were completely out of eggs! What now? "Mary Grace, you run to Leanna's house and see if she has any eggs. Several minutes later she came back, panting, with two eggs.

By that time Jeriah informed me that the ice cream freezer won't work. "I'll help you figure out what's wrong," I said running downstairs and taking a look at it. The problem was beyond my girlish brain. "What now? Jeriah you could go up to Pauls and borrow the head of their freezer." Ten minutes later he was back, but lo and behold, their's didn't work either! Now what??

I ran out to the shop and told Dad about our predicament.Tell Jeriah to get some store boughten ice cream," he instructed.

By the time he returned with it, my brother Micah had fixed the freezer, but of course the ice was melted beyond satisfaction. Jeriah headed to the shop with the boughten ice cream while I quickly frosted the cake.

Believe it or not, as I went out through the screen door I somehow managed to drop the cake! Thankfull it landed right- side up, even though it did look like an earthquake had gone through it!

The remainder of the day passed a bit more smoothly, though I was aghast when I discovered a carton with eggs in a back corner of the counter once I finally got a chance to clean up a very messy kitchen! No one would have had to go borrow eggs after all. By 6:00 we were ready for our guests and yes, we did have a pleasant time with them and a great day at the wedding, the next day. Little did I realize that the couple that got married would be my brother and sister-in-law in a couple years, thanks to that fine young man from Ohio!

Meanwhile, try this favorite recipe from that time in my life! 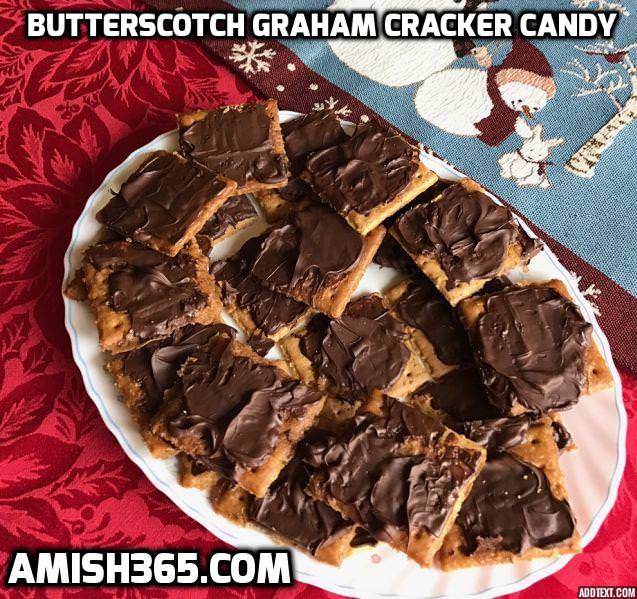 Layer a rimmed  11 X 17 cookie sheet with parchment paper.
Put a single layer of  graham crackers side by side (with 4 sides touching one another) on parchment paper. Bring the following mixture to a rolling boil:

1 cup butter (for crunchier crackers, use only half cup)

Spread mixture on top of crackers.

Remove from heat and sprinkle with 1 1 /2 cups chocolate chips. Let set a few minutes and then spread melted chips over with a butter knife. Cool and break into sized pieces of your choice. Enjoy and have a Merry Christmas!