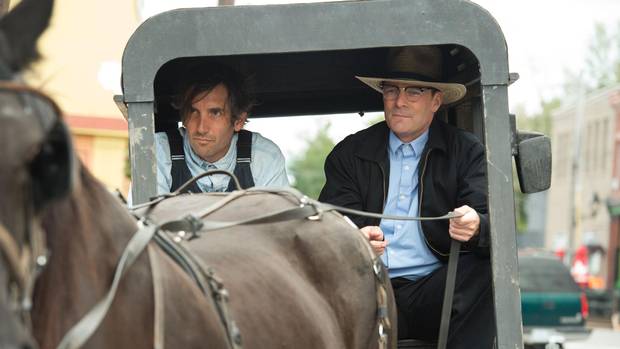 A scene from the new CBC drama, Pure.

PURE:  There is a mini-series debuting on the Canadian Broadcast Corp (CBC) this week (it airs Mondays at 9 p.m.) called Pure.  The show explores the seamy connections between drugs, Mexican Mennonites, and Mennonites in Canada.  The show hints of dark forces pulling at the Mennonites in the bucolic Ontario countryside. If any of our Canadian friends watched the first episode of the show, I'd love to hear your thoughts about it.  Sounds like the program is relatively well thought-out, a good thought-provoking drama.  You can read more here.

VISIT TO AMISH COUNTRY:  A columnist with the Reading, Pennsylvania newspaper visited Amish country and then says surprisingly little.  Not trying to be hypercritical, but her piece was so short, I kind of scratched my head wondering what the point was or whether I missed something?  Click here to read.  (Note: not that you'd be missing much, but I was permitted to read this article once free of charge, then a paywall kept going up, so not sure if the free reading was a fluke or whether you get one)

INDIAN VIEW OF THE AMISH:  This was an article that showed up in an Indian newspaper, possibly Sri Lankan.   Of course, I couldn't read it. I tried a Google translate program and it did a really poor job of translating so even though it was in English it was still too choppy to follow.  So if anyone can read this article, I'd love to know the basic gist. Click here.

EGG AND BACON WAFFLES:  This recipe caught my eye because it shares a lot of similarities with Pennsylvania Dutch cuisine.   Although one ingredient it calls for: 4 rashers Australian short-cut bacon, grilled.  What is a rasher?  I know, I could look it up, but maybe one of our Down Under readers can tell me! Click here for the recipe.

RAW CAMEL MILK:  Some Amish are getting in on this increasingly prized delicacy, but the FDA is watching. Click here to read more.

AMISH JOKE:  You have to scroll all the way to the end of the article to the "Joke of the Week" section where this columnist has a joke...I won't give it away here, but...hmmmm...I guess I think it's funny.  I mean, it IS funny.  But I also have to think about other aspects of it as someone who studies Amish culture.  Honestly, I think most Amish people would think the joke is funny.  I guess my only hesitation is that the joke sort of perpetuates a stereotype that just isn't accurate. I think 99.9 percent of the Amish, even the most conservative insular Swartzentruber would probably know what this device is.  Well, I mean, maybe a very, very insular Swartzentruber might not...I don't know,but the vast majority of Amish would know what this is....anyway click here to read.

MILLIE'S PEANUT BUTTER & BANANA WRAPS:  Sounds like something more Elvis than Amish, but check out Millie Otto's "My Amish Home" column this week for the recipe! Click here.